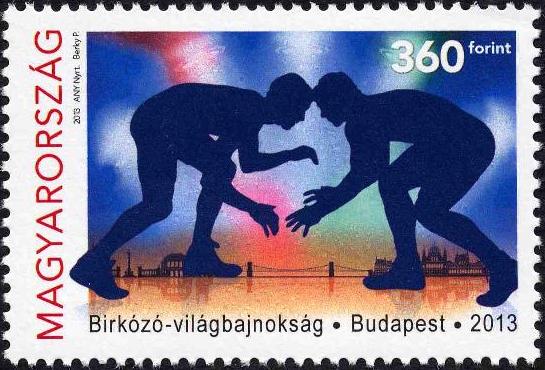 Magyar Posta is issuing a commemorative stamp to mark the World Wrestling Championships to be held at the Papp László Sports Arena in Budapest between 16 and 22 September 2013. The silhouette of two wrestlers is in the middle of the stamp design, while the outlines of some of the sights of the city hosting the world championships, Budapest, are in the background. Two hundred thousand copies of the stamp designed by PéterBerky (1973-2013) were made at the ANY Security Printing Company. The new stamp will be available at large post offices and Filaposta in Hungary from 2 August, but may also be purchased from Magyar Posta’s online store.

At the ancient Olympics there were three forms of this sport: wrestling itself, pankration and it was one of the five disciplines of the pentathlon. A standard set of rules evolved in the second half of the 19th century and competitive wrestling as we know it today began. It was one of the sports at the first modern Olympic Games in Athens in 1896. The International Federation of Associated Wrestling Styles (FILA) was founded in 1912 and today has 180 member countries.Wrestling is a combat sport that does not allow the use of weapons, kicking or hitting. The two competitors may only grapple and win by holds or pinning their opponent to the ground. Two wrestlers, wearing figure-hugging clothes and boots, face each other in a soft circular ring. Wrestling is a contest between two opponents who try to gain control over each other by physical means. The aim of wrestling is to pin one’s opponent to the ground (a fall) or to perform holds which score better according to the rules. For men there are two basic styles, Greco-Roman, which only allows the use of the upper body, and freestyle, where the legs can also be used. Women only compete in freestyle events. International competitions have 4 age groups and adults are divided into 7 weight categories. A match consists of two three-minute bouts. The victor is either the one who scores the most points or who concludes the match earlier with a fall or technical fall. Three officials preside over each match. The mat chairman observes the contest from a table to one side of the mat; the judge sits opposite and scores the action; and the referee oversees events between the wrestlers in the ring.  To date Hungarian wrestlers have won 100 gold medals at 19 Olympic Games, and 25 world and 56 European championships. Richárd Weisz was the first Hungarian to become an Olympic champion in 1908. Hungarian wrestling is in the top flight of the sport in world terms. The sport was 7th in the medals table at the London Olympics, ahead of many major wrestling powers.