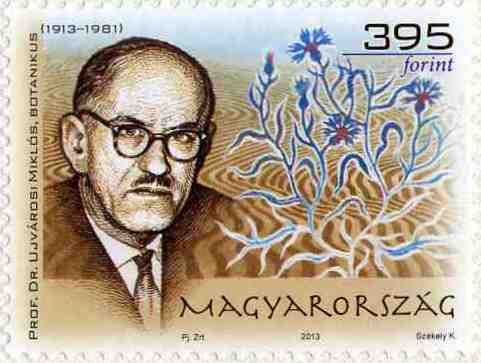 Magyar Posta is marking the 100th anniversary of the birth of the botanist Dr Miklós Ujvárosi by issuing a commemorative stamp. His portrait is featured on the stamp released on 5 February along with cornflowers, a reference to the fact that he was regarded as an authority on arable weed communities in scientific circles. One hundred and fifty thousand copies of the stamp with a face value of HUF 395 designed by the graphic artist KálmánSzékelywere made at the banknote printing company Pénzjegynyomda.

Prof Dr Miklós Ujvárosi (Hajdúnánás, 25 January 1913 – Budapest, 15 August 1981) was a Hungarian botanist, who was concerned with agricultural botany, floristics and herbology. He was the founder of the school of agricultural botany in Hungary. After completing secondary school in Hajdúnánás, he obtained a doctorate from the Faculty of Humanities at the University of Debrecen in 1938 and received the degree of Candidate in 1952. A university teacher, he taught at the Institute of Economics from 1943 and was an assistant professor at the Debrecen University of Agricultural Sciences from 1947. He lectured in his specialist area, weeds, at all universities offering agriculture in Hungary. He was a guest lecturer on many occasions at the predecessors of the SzentIstvánUniversity, the Gödöllő University of Agriculture, and the University of Horticulture and Food. He was the director of the DebrecenBotanical Garden and the chief administrator of the Botanical Garden of Cluj in Romania between 1941 and 1943. From 1949 to 1955 he was the head of unit at the botanical gardens in Pallag and then Martonvásár. From 1955 until his retirement in 1980 he managed the Botanical Garden of the HungarianAcademy of Sciences’ Institute of Botany in Vácrátót and for 24 years he was the deputy head of the research institute.

His main area of research as a flora and vegetation researcher and as an ecologist was arable weeds in Hungary. He published several articles, books and extensive manuals on the subject. In 1973 the books entitled “Weeds” and “Weed Control” summarising his research projects were published and in the same year he was awarded the State Prize (third class) for his work in devising the scientific bases for protection against weeds. As a continuation of his work and weed biology school, his students founded the Dr Ujvárosi Miklós Weed Association in 1984. A memorial session was held in his honour in Hajdúnánás and Debrecen in 1988. The Plant Protection Association of the Hungarian Society for Agricultural Sciences named a commemorative medallion after him. A memorial column stands in his honour in the park next to the secondary school in Hajdúnánás, and a memorial plaque preserves his name on the wall of the research building of the Institute of Ecology and Botany of the HungarianAcademy of Sciences in Vácrátót. (Source: hu.wikipedia.org)