HUNGARIAN SAINTS AND BLESSEDS I

Magyar Posta is presenting the theme of Hungarian saints and blesseds through a series of stamps to be issued over several years. The stamps of the first miniature sheet feature the panel of the main altar of the Cathedral of Saint Martin in Spišskà Kapitula, Slovakia, which used to be part of historic Hungary. The panel depicts the country’s holy kings, St. Ladislaus, St. Emeric and St. Stephen. The unusual feature of the issue is that, apart from the standard version of the miniature sheet, special and monochrome editions are also being released. The miniature sheet was designed by György Kara and produced by Pénzjegynyomda. The new issue will be available at main post offices and at the Filaposta from 14 August but it can be ordered online from Magyar Posta’s internet shop as well. 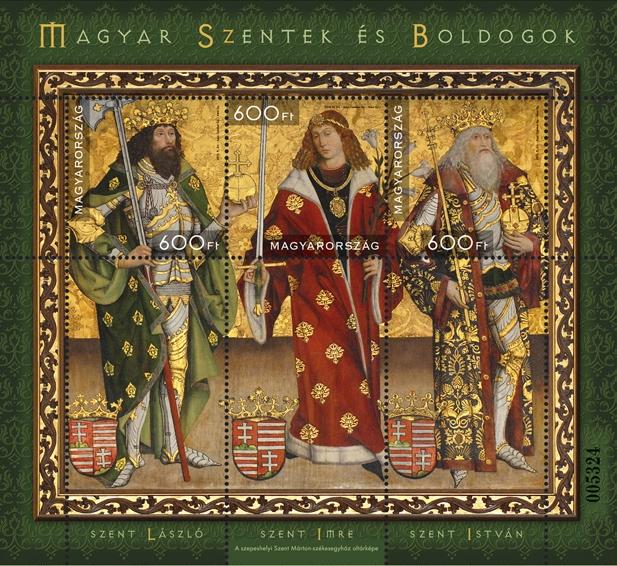 Canonisation and beatification is the ceremonial proclamation that a deceased person has been received among the saints or blesseds by God. It was Pope Alexander III who first made the distinction between universally recognised saints and locally venerated blesseds. This was when the terms ‘sanctus’ meaning saint and ‘beatus’ meaning blessed came into use. The precise procedure for beatification and canonisation was established by Pope Urban VIII, which, with minor modifications, is in use today. To date Hungary has given the Catholic communities of the world more than 50 saints and blesseds.  The first piece in the philatelic series presents the holy kings of Hungary. The dynamism of the saints’ attributes leaning towards each other counters the static nature of the three carefully composed figures of equal height. On the heraldic right stands the middle-aged Saint Ladislas wearing a fleur-de-lys crown. In the middle is the serene-looking, youthful Prince Emeric. Next to him on the left is the elderly Saint King Stephen, who commands respect. His armour evokes the period of Sigismund of Luxemburg. He holds a golden sceptre with a long rod in his right hand and a huge orb in his left hand.

(Source: Dr Terézia Kerny. The panel of the main altar of the Cathedral of St. Martin in Spišskà Kapitula depicting the holy kings of Hungary)

The standard version is made by offset printing.

The offset printed special edition has gilded motifs which are enhanced by diffraction film and embossing, lending the miniature sheet a shiny surface.
Number of copies: 20,000 (standard edition); 10,000 (special edition); 5,000 (monochrome edition).
5,000 copies were made of the set, which contains a special edition numbered from 1 to 5,000 and a similarly numbered philatelic monochrome edition.
The latter is sold only as part of the set.
The monochrome edition may not be used to pay for postage.
Perforated size: 40 x 40 mm Cut size: 145 x 155 mm
Printed by Pénzjegynyomda
Photo by Gyula Czimba Designed by György Kara