Magyar Posta is celebrating the 150th anniversary of the birth of Géza Gárdonyi by issuing a commemorative stamp. The writer’s portrait occupies the centre of the stamp, while the background printing features an engraving of the fortress of Eger from the 1600s. The inscription in the foreground at the bottom of the stamp is written in Gárdonyi’s own cipher, which he called ‘Tibetters’, i.e. Tibetan letters. It reads ‘I congratulate you for successfully deciphering this text. You have found passage to the high, remote Tibet of the Hungarian language. If you manage to get as far as I have, you will find the golden apple too, which is called analogy’. The code was deciphered by Gábor Gilicze and Ottó Gyürki. On the commemorative cover for the stamp an excerpt from a Gárdonyi manuscript appears above a row of an imaginary bookshelf. The commemorative postmark was inspired by the typewriter, an invention of the age, which Géza Gárdonyi was among the first to use. The photographic material for the release was provided by the István Dobó Castle Museum in Eger.
One hundred and fifty thousand copies of the stamp designed by Anita Laczkó were printed by the ANY Security Printing Company . The new stamp will be available at main post offices and at the Filaposta from 14 August but it can be ordered online from Magyar Posta’s internet shop as well. 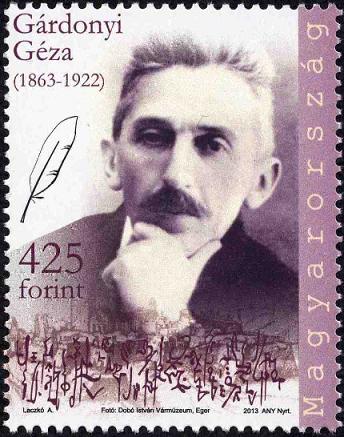 Géza Gárdonyi, born Géza Ziegler, (Gárdony-Agárdpuszta, 3 August 1863 – Eger, 30 October 1922) was a novelist, poet, dramatist, journalist, teacher and honorary member of the Hungarian Academy of Sciences. He was a major literary figure at the turn of the 19th and 20th centuries, and remains extremely popular today. Gárdonyi was unusual in that he had no affiliation to any particular literary circle at the time. His oeuvre represents a transition from the romantic, anecdotal narrative of the 19th century to the writers who emerged at the start of the 20th century advocating the Art Nouveau and naturalist-symbolist ideals fostered by the periodical Nyugat. Gárdonyi is best known to posterity for his historical novels written in the first decade of the 20th century, Eclipse of the Crescent Moon (1901), Slave of the Huns (1902) and Prisoners of God (1908).Starting his career as a school teacher, Gárdonyi later turned to journalism. He wrote not only novels and short stories but also poems, dramas, tales and humorous anecdotes, and edited dictionaries and was interested in linguistics. His translation of Dante’s Divine Comedy was the first in Hungarian, which won the respect of the poet Mihály Babits, a later translator of the same work. Gárdonyi was a man of genuine versatility with remarkable gifts in other forms of art. He was a composer of music and songs, an excellent violinist and organist, a skilled draughtsman and painter, a set designer for his own dramas and an able photographer. His achievements as a natural scientist and archaeologist were also noteworthy. He was active in the mediation of culture and the preservation of traditions. He was a fine chess player and fencer, and started business ventures. Gárdonyi contributed as secretary to the creation of the Feszty cyclorama and, after he finished his Dante translation, he organised and created a cyclorama of Dante’s Hell. 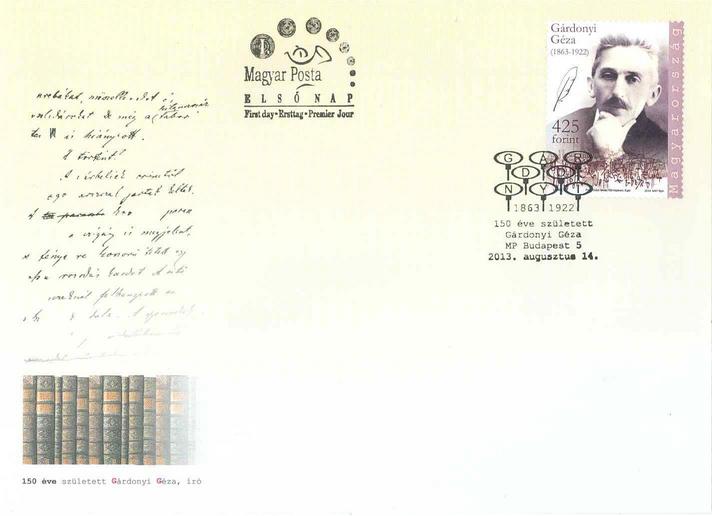