Magyar Posta is issuing its numbered souvenir sheet released on 9 May 2019 in honour of the centenary of the birth of Mihály Gervay and the 150th anniversary of the world’s first official postcard being issued also in limited printing technique editions and in the form of an exclusive stamp set. The new issues were made based on the designs of the graphic artist Attila André Elekes and will be available while stocks last at Filaposta in Hungary from 3 June 2019, but may also be ordered by e-mail at philately@posta.hu. 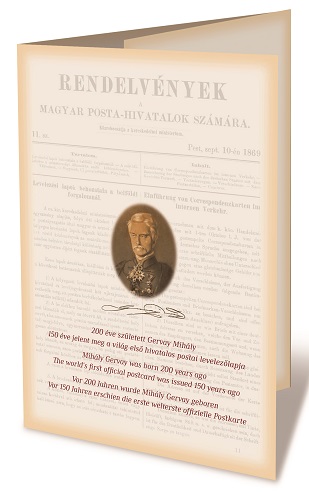 In addition to the standard edition of the souvenir sheet previously released to mark the centenary of the birth of Mihály Gervay and the 150th anniversary of releasing the world’s first official postcard, on this occasion a red-numbered imperforated and a green-numbered specially perforated edition of the souvenir sheet as well as an exclusive stamp set are being issued.

The stamp set contains a standard edition of the commemorative souvenir sheet together with its red-numbered imperforated and green-numbered specially perforated edition as well as a black print, which may only be purchased as part of this stamp set. The souvenir sheets and the black print are in mounts to protect them. The stamp set sold in a resealable plastic case comes with a numbered Certificate in Hungarian, English and German bearing an embossed postal seal verifying its originality.

All the editions in each set of the 1,000 sets issued bear the same serial number in the number range between 1 and 1,000. The red- and green-numbered souvenir sheets with serial numbers above the 1,000 number range are also available for sale outside the set.

The black print may not be used to pay for the postage of letter mail.