For Youth: William Shakespeare was born 450 years ago

For Youth: William Shakespeare was born 450 years ago 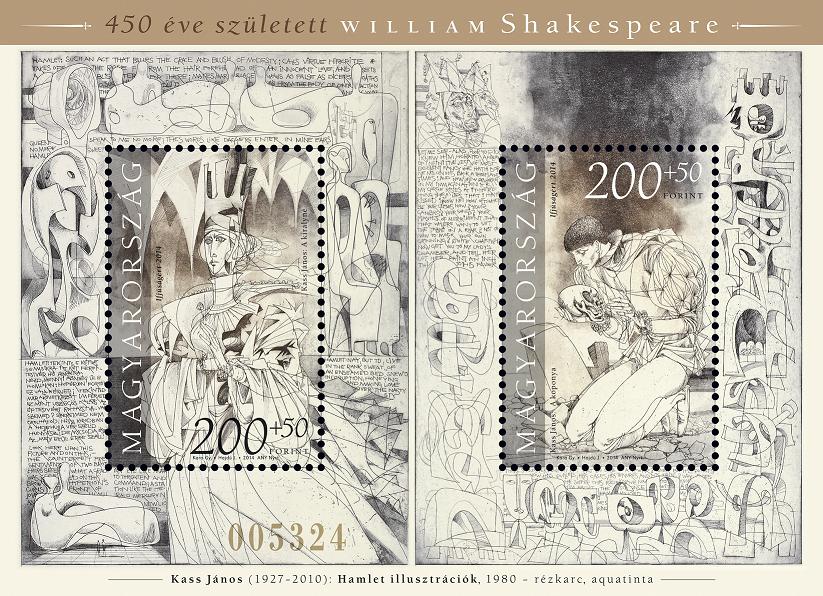 Magyar Posta is marking the 450th anniversary of the birth of William Shakespeare by issuing a numbered commemorative stamp block with a surcharge. The block uses reproductions of two illustrations of Hamlet, The Queen and The Skull, by the graphic artist, sculptor and stamp designer János Kass (1927-2010), who was awarded the Munkácsy and Kossuth Prizes and the title Artist of Excellence. Magyar Posta devotes HUF 100 from the proceeds of the surcharge on each block to supporting youth stamp collecting. The block was designed by the graphic artist György Kara and produced by the ANY Security Printing Company. The new issue will be available at large post offices and Filaposta in Hungary from 25 April, but may also be ordered from Magyar Posta’s online store.

William Shakespeare (1564–1616), the English playwright, poet and actor, is regarded as the greatest writer in the English language. He is often referred to as the English national poet. His works have been translated into almost all living languages and his plays are performed constantly. He is one of the few playwrights who wrote both comedies and tragedies that have stood the test of time. His literary output reflects not only poetry and drama of the highest calibre, but also encompasses every aspect of human life, portraying the most varied nuances of emotion, and succinctly and clearly expressing philosophical ideas. His works were written between 1588 and 1616. His tragedies are regarded as the height of his achievements. Hamlet, his first tragic hero, is mentioned more frequently than any other Shakespearean character particularly due to his famous monologue “To be, or not to be: that is the question”. (Source: wikipedia.org)