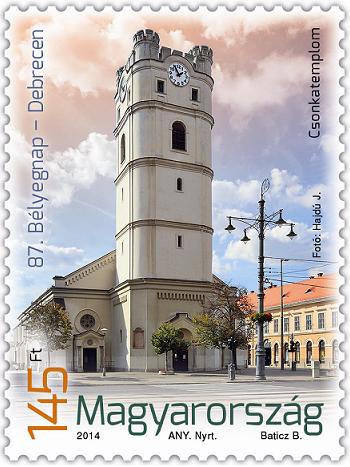 Debrecen will host the events of the 87th Stamp Day and the HUNFILA 2014 International Stamp
Exhibition between 25 and 27 April 2014. Magyar Posta is issuing its traditional two-denomination set
of stamps and a stamp block with a surcharge for this year’s Stamp Day. In addition to the standard
version of the block, a red-numbered edition adorned with polished quartz crystals is also being
released. Magyar Posta devotes the HUF 200 surcharge on each block to supporting organised stamp
collecting in Hungary. The Stamp Day novelties, designed by Barnabás Baticz based on photographs
by József Hajdú, were produced by the ANY Security Printing Company. 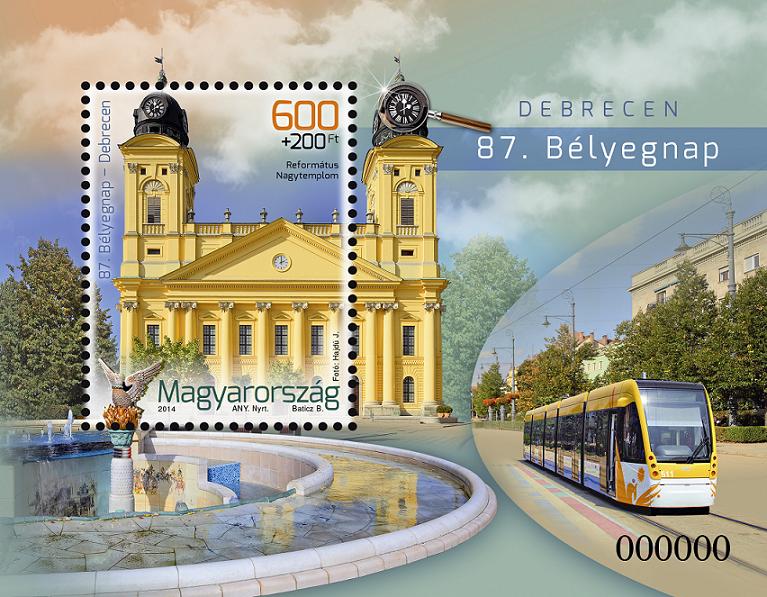 Debrecen, the Civis City, is hosting the events of the 87th Stamp Day. Of the city’s iconic buildings the
neoclassical Reformed Great Church, Hungary’s main Calvinist church, is shown in the design of the block
marking the festival of philatelists. The two-stamp set features the city’s oldest standing church, the Reformed
Small Church (a baroque edifice later refashioned in the Romantic style which is locally known as the “Stump”
church because it lost the top of its tower in a storm in 1907), and the Kölcsey Centre, a popular venue for
conferences and cultural events, where the 87th Stamp Day will also be held.
Five thousand copies of the DEBRECEN STAMP SET have been produced in honour of the 87th Stamp Day.
This Set includes, in addition to the two-denomination commemorative set and the stamp block with a
surcharge to support organised stamp collecting in Hungary, a special version of the stamp block numbered in red and adorned with polished quartz crystals. The special edition is only available as part of this compilation.