World War I broke out 100 years ago

WORLD WAR I BROKE OUT 100 YEARS AGO

Magyar Posta is issuing a commemorative stamp to mark the hundredth anniversary of the outbreak of the First World War. The main motif of the stamp is a mounted officer's medal group, and a part of a contemporary map can be seen on the background print. On the commemorative envelope there is the obverse and reverse of the Charles' Troops' Cross, the Wound Medal and the First World War Commemorative Medal. Source material for the design was provided by the Hungarian Military History Institute and Museum. The stamp was produced by ANY Security Printing Company, using photographs by Péter Szikits, based on the plans of graphic artist György Kara. The new product is available from 28 July at large post offices and at Filaposta, and it can also be ordered from the webshop of Magyar Posta. 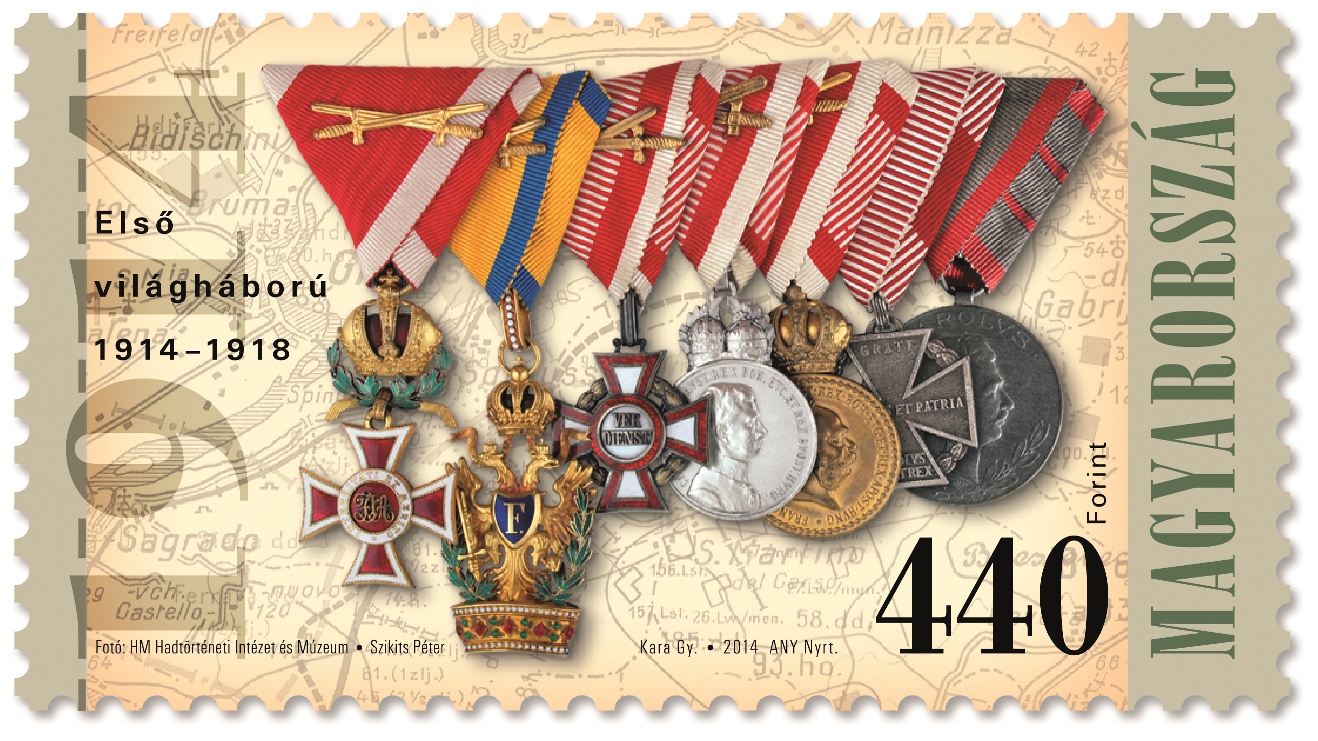 The First World War - due to its widespread nature - made it necessary to change and extend the Austro-Hungarian Monarchy's system of Orders, Decorations and Medals in several respects. At the beginning of the war the battlefield merits of soldiers fighting in the Austro-Hungarian army were recognised by granting grades established in earlier centuries, but as the world conflagration proceeded, several new forms of orders appeared to suit increasing demands, and some of them were supplemented with new grades. Some of the Monarchy's already existing honours were changed in their appearance to indicate that they were awarded in recognition of battlefield merits. Therefore members of the Austro-Hungarian (and the Allied) military forces deemed worthy of recognition for their "act of outstanding gallantry in the presence of the enemy" were granted numerous medals with the (red and white striped) "War Ribbon", "War Decoration" and, from the beginning of 1917, with the newly introduced "Swords" (a device forming two crossed swords). On the stamp an officer's medal group can be seen from the First World War, granted for battlefield merits, suiting the official order of precedence. The medals are suspended on trifold ribbons characteristic of Austro-Hungarian honours, in the following order: Imperial Austrian Order of Leopold, Knight's Cross with War Decoration and Swords; Imperial Order of the Iron Crown, 3rd Class with War Decoration and Swords; Cross of Military Merit, 3rd Class with War Decoration and Swords; Silver Medal of Military Merit with War Ribbon and Swords; Bronze Medal of Military Merit with War Ribbon and Swords; Charles' Troops' Cross; Wound Medal, with a strip indicating one wound on its ribbon. (Source. Dr Gergely Sallay, historian/museologist, Hungarian Military History Institute and Museum)