Robert Capa was born 100 years ago

ROBERT CAPA WAS BORN 100 YEARS AGO 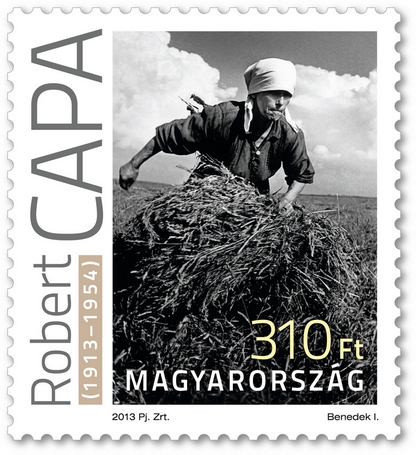 At the proposal of the Hungarian National Commission for UNESCO, in 2013 the General Conference of the international organisation adopted the centenary of the birth of Robert Capa as one of the anniversaries UNESCO deemed worthy of celebration. Magyar Posta is issuing a commemorative stamp in honour of the occasion. The stamp design employs Capa’s photograph Woman Gathering a Bundle of Hay on a Collective Farm (Ukraine, August, 1947), whileBudapest (Hungary, 1948) from the collection of the International Center of Photography / Magnum Photosis featured in the design of the first day cover. The miniature sheet was designed by Imre Benedek and produced by the printing company Pénzjegynyomda. The new stamp will be available at large post offices and Filaposta in Hungary from 2 October, but may also be purchased from Magyar Posta’s online store. 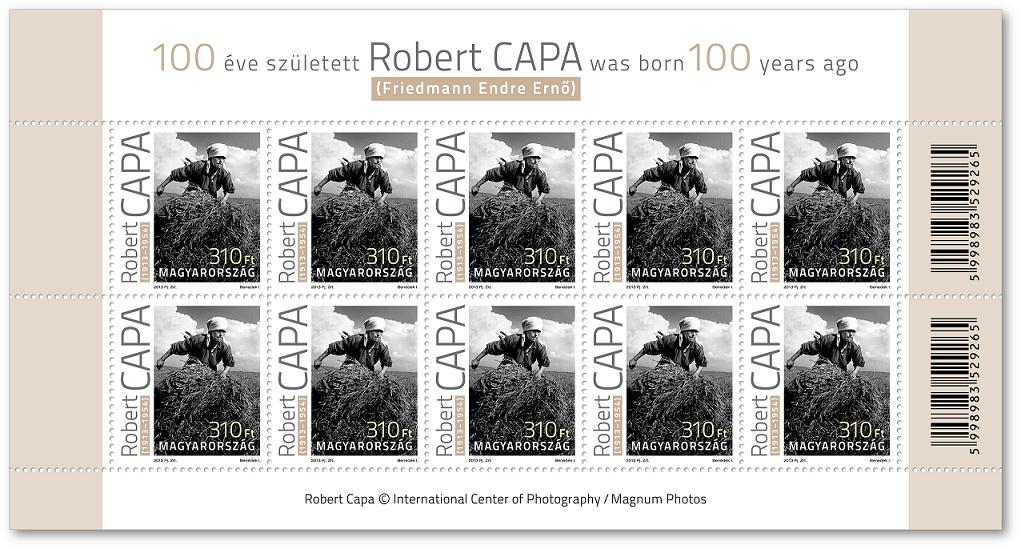 Robert Capa was born Endre Ernő Friedmann in Budapest on 22 October 1913. He grew up in the heart of the city, where his parents owned a tailor’s shop and apartment in Városház Street. In 1931 he moved to Berlin, where he studied political journalism before starting work for a photo agency. After brief periods in Vienna and Budapest in 1933, he went to Paris to try his luck in the film industry and with the illustrated weeklies. His photoreports made during the Spanish Civil War altered his life. It was then he became a war correspondent but he never lost his attraction to cinema. In 1938 he travelled to China as an assistant for Joris Ivens’s documentary film. The following year Capa emigrated to America. During World War II he worked as a reporter for Life magazine on the front line in North Africa, Italy, Normandy and Germany. After the war, he prepared major reports on the Soviet Union, Hungary and Israel. He also worked in Hollywood, and writers, directors, actors and actresses numbered among his friends. He took many photographs during shooting films. He died on 25 May 1954 when he stepped on a landmine while on assignment in Indochina.Capa left a legacy of over 70,000 negatives, contact prints, prints and documents, which are kept in the International Center of Photography established by his brother in New York. At the turn of 2008 and 2009, the Hungarian government enabled the purchase of 937 images comprising the Robert Capa master selection. These are now part of the collection of the Hungarian National Museum, where the exhibition The Player will present Robert Capa’s world through photographs, projected images, objects, documents, installations and sound effects between 18 September 2013 and 12 January 2014.
(Source: Éva Fisli, curator, Hungarian National Museum) 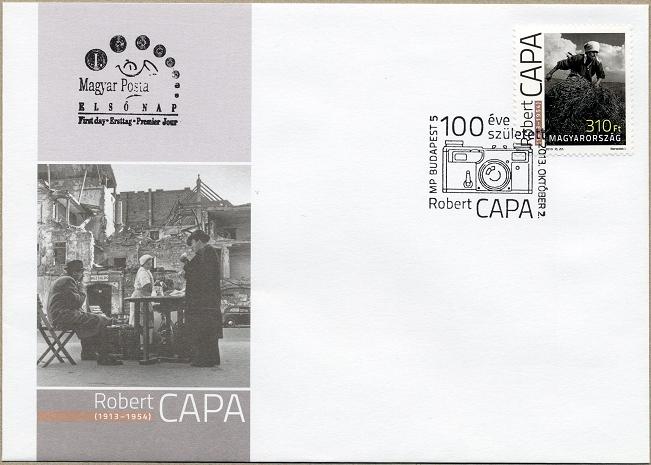