“Szili” and “Nohab” on stamps


In June, Magyar Posta is publishing two new stamps on the subject of rail transport. On the 50th anniversary of their entry into service, Hungarian State Railways’ V43 Szili electric locomotive and M61 “Nohab” diesel-electric locomotive have appeared on stamps. The designs of the first day covers and the postmarks are decorated by compositions related to locomotives. The new stamps were designed by the graphic artist PéterNagy using photographs by Attila Vörös and made by the printing company Pénzjegynyomda. The new stamps will be available at Filaposta and large post offices in Hungary from 5 June, but may also be purchased from Magyar Posta’s online store.

In 1961 Hungarian State Railways decided to acquire a new class of “standard”, high performance electric locomotive to replace rolling stock from the twenties and thirties, and to run on the growing number of electrified lines. The first seven locomotives numbered V43 001 to 007 were assembled in the Krupp Works and entered into service in 1963. At the time they were among the most modern vehicles of their type in Europe, mainly due to the use of silicon semiconductors, hence also their nickname Szili. A total of 379 V43s were built. The last Szili, V43 1379, left the Ganz-Mávag Works in 1982. The V43 became the main workhorse of the electrified lines within a short space of time. The locomotive is suitable for pulling passenger, freight and push-pull trains. 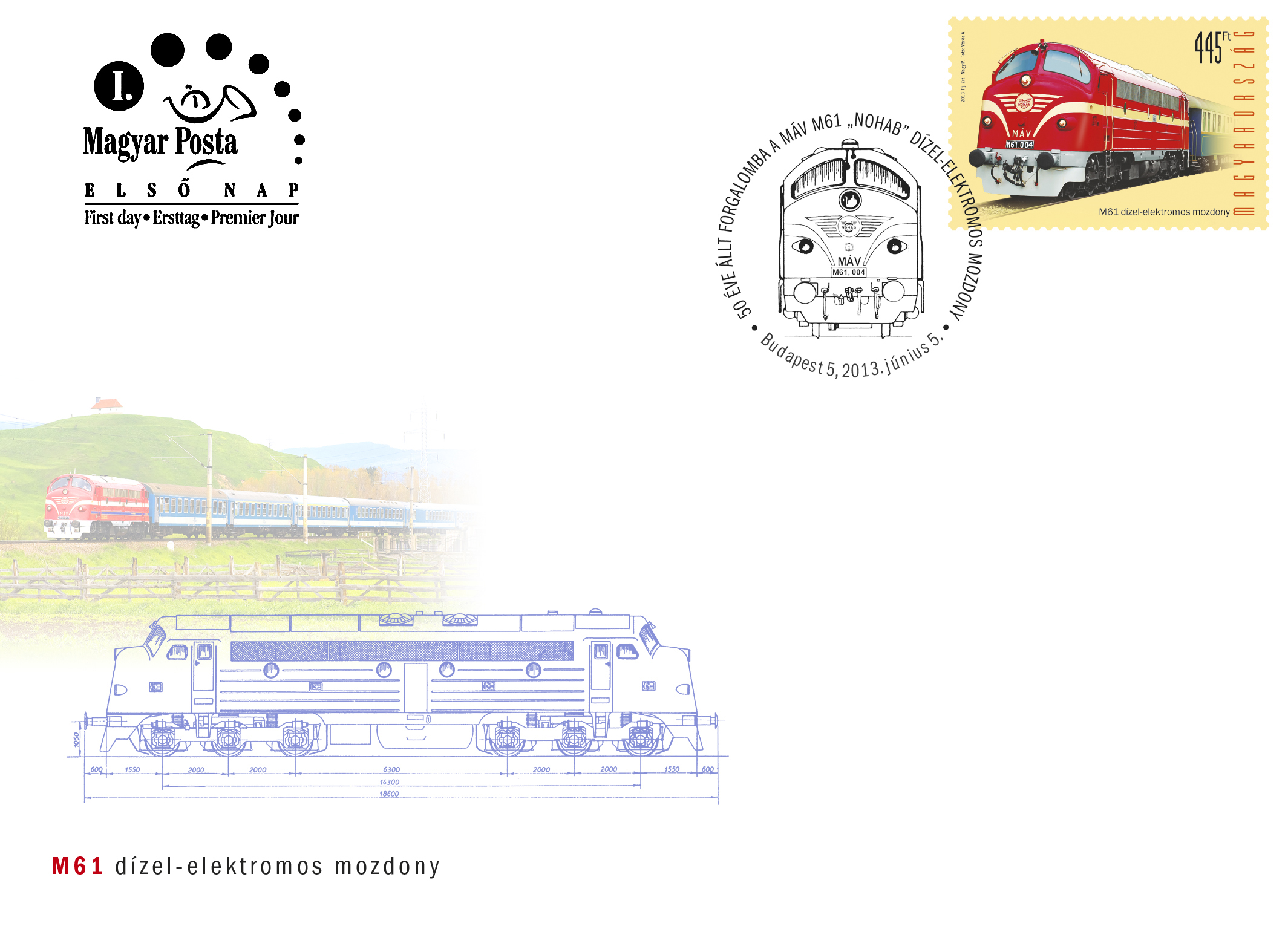 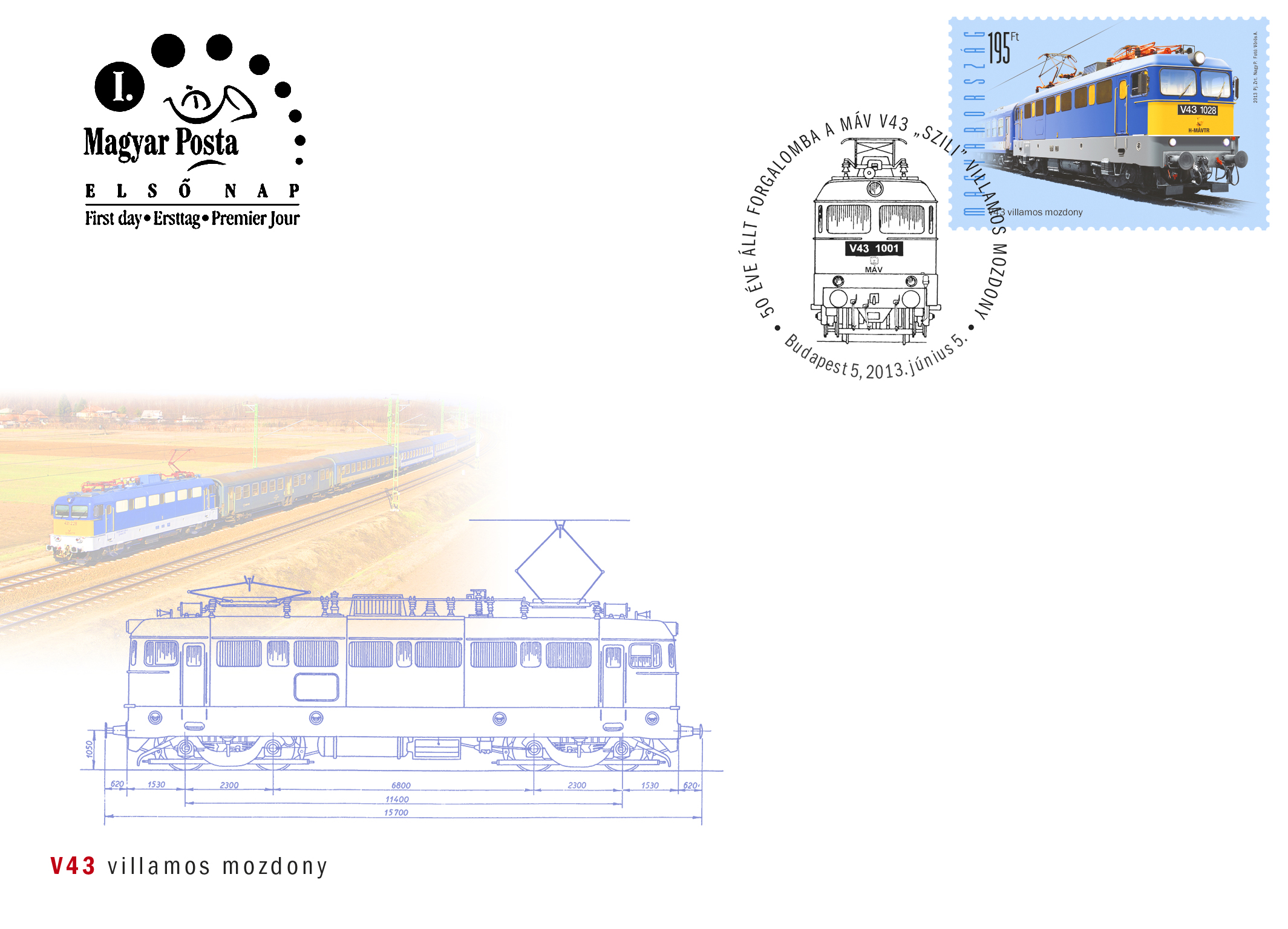 At the end of the fifties steam traction was in decline in Hungary as elsewhere. At the same time Hungarian State Railways, like many other rail companies, was gradually introducing diesel power and electrification. Because only a few main lines had been electrified by this time, modernising traction meant the acquisition of diesel locomotives. Trials were held for several test vehicles before the decision was reached to purchase a six-axle diesel-electric locomotive from the Swedish engineering firm NOHAB. The first two vehicles in the series began operating in scheduled services in May 1963. Later they were present on all main lines, mainly pulling long-distance fast and express trains. NOHAB became a cult locomotive among train enthusiasts and some have been preserved in museums and for use for special “nostalgia” services such as the Transylvanian Express. Source: vasutak.eoldal.hu; nohab-gm.hu
LOCOMOTIVES
Order code: 2013140050211 (stamp set)
2013140060012 (V43-FDC), 2013140060112 (M61-FDC)
Date of issue: 5 June 2013
Total face value: HUF 640
Number of copies issued: 200,000 sets
Perforated size: 40 x 30 mm (50 stamps/sheet)
Printed by Pénzjegynyomda Zrt.
Photograph by Attila Vörös
Designed by Péter Nagy