Magyar Posta’s commemorative stamps for 2014 will remember special anniversaries related to Hungarian cultural history and international events relevant to Hungary. An important consideration in planning the topics was the continuation of traditional series popular with Hungarian and foreign collectors. Twenty-one special stamps, four special blocks and six special miniature sheets are scheduled to be released in 2014.
Next year eminent Hungarian personalities will be remembered on the bicentenaries of their birth: MiklósYbl, the great 19th-century Hungarian architect and an important exponent of historicism in European terms, as well as the composer, writer and actor BéniEgressy will appear on stamps. Although Ábrahám Ganz was not born in Hungary, the bicentenary of the birth of this foundryman, industrialist and pioneer of Hungarian heavy industry will be commemorated with a stamp.
In the Hungarian Performers series, stamps honouring the centenaries of the birth of the actress, twice winner of the Kossuth Prize, Artist of Merit and Artist of Excellence, and member of the “Company of Immortals” Klári Tolnay, as well as that of the pianist, triple winner of the Kossuth Prize, and Artist of Excellence Annie Fischer will be released.
As part of the Hungarian Saints and Blesseds series a miniature sheet will be issued in honour of the Hungarian martyrs of the communist dictatorship, the Blessed István Sándor, a monk of the Salesian Society, the Blessed Szilárd Bogdánffy, bishop of Szatmár, and the Blessed Zoltán Meszlényi, suffragan bishop of Esztergom.
A stamp issue will pay tribute to the victims of the Hungarian Holocaust on its 70th anniversary as well as those who fell in World War I on the centenary of its outbreak.
The stamp series Synagogues in Hungary will continue. The buildings of the synagogues in Mád and Miskolc will feature in this issue.
István Werbőczy, the jurist, scholar, chief justice and palatine of Hungary, finished the Tripartitum 500 years ago. The quincentenary of the publication of his three-part collection of the customary law of Hungary will be commemorated on a stamp.
In keeping with tradition a two-denomination set of stamps will be issued for Stamp Day and a stamp block with a surcharge will be on sale to support organised domestic stamp collecting. The 87th Stamp Day is due to take place in Debrecen on 11 April 2014. Next year’s block with a surcharge, whose proceeds will be devoted to youth stamp collecting, will mark the 450th anniversary of the birth ofWilliam Shakespeare.
2014 is the Year of the Horse in the Chinese horoscope, which will be the subject of an exclusive miniature sheet.
The designs of the Fauna of Hungary set and block will show predatory insects, while the Besztercei plum variety and the Tahi variety of strawberry will appear on stamps in the Flora of Hungary series.
The exclusive miniature sheet series presenting features of the House of Parliament, which showed the Chambers in 2012 and the Dome Hall in 2013, will be continued.
Magyar Posta’s stamps have achieved outstanding results in the PostEurop votes for the best EUROPA stamps in recent years. Next year European stamp issuers can compete with stamps on the subject of national musical instruments.
Among the international sporting events in 2014 there will be a stamp issue to mark the Football World Cup in Brazil and the EuropeanWomen’s Handball Championship, which will be hosted by Hungary and Croatia.
Releases of miniature sheets for young people will focus on Animal Cubs and Transport.
On the 25th anniversary of the foundation of the Hungarian Maltese Charity Service an ordinary stamp will be released, and Antique Furniture and Protected Hungarian Flowers will also be expanded dependent on demand next year.
Magyar Posta intends to issue in its range of special stamps 21 stamps, 4 blocks and 6 miniature sheets in 2014. The total annual face value is expected to be HUF 14,700, to which surcharges amounting to HUF 300 will be added. Of this, HUF 200 will be devoted to organised stamp collecting in Hungary and HUF 100 to popularising youth stamp collecting. The number of ordinary postage stamps issued next year will be determined by the demand for postage. 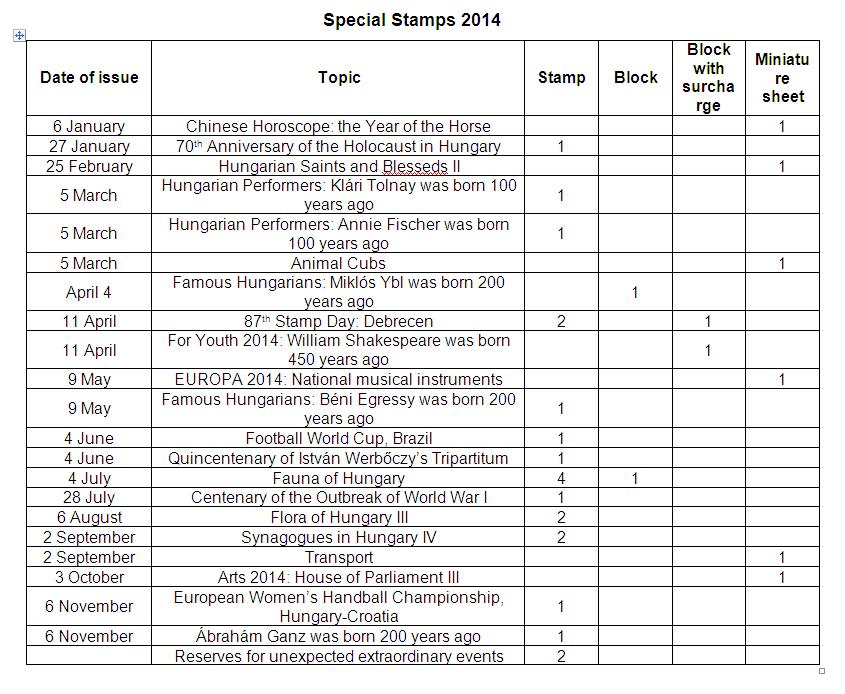