Magyar Posta is issuing a commemorative stamp to celebrate the Zoltán Kodály memorial year. Based on the designs created by András Szunyoghy, Jr., a graphic artist, the stamp was produced in 240,000 copies in Pénzjegynyomda Zrt. The novelty will be available from 3 April at first day post offices and at Filaposta, and can also be ordered from Magyar Posta’s online store. 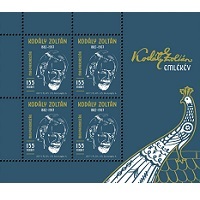 Zoltán Kodály (1882-1967) is an outstanding artist with international reputation, a triple Kossuth Prize winning Hungarian composer, musicologist, music educator, ethnomusicologist, member and president of the Hungarian Academy of Sciences, the creator of the Kodály method and one of the most important representatives of the twentieth century Hungarian music. Zoltán Kodály is one of those internationally acknowledged outstanding Hungarians who, in 2017, is paid tribute to by the United Nations Educational, Scientific and Cultural Organization (UNESCO) as well. His work not only contributed to the development of the domestic musical and educational life, but also contributed to the mutual enrichment of cultures and supported the promotion of international understanding, deepening closer relations between the peoples. In 1904, he received a composer degree at the National Hungarian Royal Academy of Music, in 1905, a Hungarian-German teacher’s diploma at the Péter Pázmány University and in 1906, he was awarded a doctorate for his thesis entitled "The Hungarian Folk Song Verse Structure". In 1905, he launched his folk music collection series of great significance, which later on he continued together with Bartók, and in 1907, he became a teacher at the College of Music. His first composer evening was organised in Budapest in March 1910, and in 1923, he composed Psalmus Hungaricus, which had been commissioned to celebrate the 50th anniversary of unification of Pest, Buda and Óbuda. With this, Kodály in no time became Hungary’s leading composer, and in the forthcoming years, he accepted a great number of international invitations as a conductor. His works became known in many countries, and even Arturo Toscanini, perhaps the greatest conductor of those times, conducted several of Kodály’s pieces in New York. From among his orchestral works, Marosszéki táncok (Marosszék Dances) (1930) and Fölszállott a páva (The Peacock) (1939) stand out; the two most important stage works are Háry János (1926) and Székelyfonó (1932). A characteristic feature of his music is saturated with the Hungarian national traditions and folk music. His ingenious versatility went beyond composing and collecting folk music: he drew attention to the relationship of music, sound, hearing and the spoken language. His educational concept – the music teaching concept called the Kodály method, which UNESCO declared part of the Intangible Cultural Heritage in 2016 – today forms the basis of the Hungarian musical education and plays an important role in vocational education as well. The stamp has been produced in a miniature sheet format containing four identical stamps; the stamp shows a portrait of Zoltán Kodály, the edge of the sheet shows a peacock bird sitting on a roof referring to his well-known orchestral work entitled The Peacock, while the first-day envelope reveals a detail of a handwritten music sheet of this piece. In his music, Kodály used a language which does not require the knowledge of languages, because music is universal and, as Kodály used to say, "Let the music be for everyone!"