ZOLTÁN FÁBRI WAS BORN 100 YEARS AGO

Magyar Posta is commemorating the 100th anniversary of the birth of Zoltán Fábri by issuing a special stamp. Sixty thousand copies of the miniature sheet designed by the Kossuth Prize winning graphic artist István Orosz were produced by the banknote printing company Pénzjegynyomda Zrt. The new issue will be available at first day post offices and Filaposta in Hungary from 6 March, but may also be ordered from Magyar Posta’s online store. 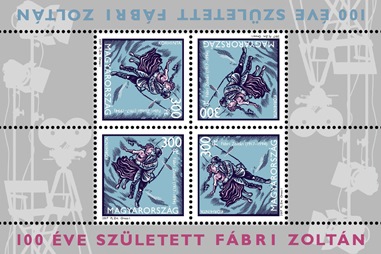 pecial awards at major international film festivals. In 1992 he received the honour Commander of the Order of Merit of the Republic of Hungary. “Mari and Máté flying on the seats of the merry-go-round, Professor Hannibal in the ancient arena, holes made by murderous bullets in a door twenty years later just as they were on the night of the tragic events of 1956, the empty building plot of The Boys of Paul Street, the interminable box making directed by an obsessive sergeant major, and regulars peaceably sipping wine amidst the horrors of the Second World War are but a few of the many unforgettable moments from the films of Zoltán Fábri, who was born 100 years ago. Trained as a fine artist, Fábri, who as a young man worked as a theatre set designer, returned to painting in the last decade of his life, but in the thirty years between these two periods, between 1952 and 1983, he devoted himself to his true metier as a film director, making 22 feature films including such classics as Sweet Anna, The Last Goal, 141 Minutes from the Unfinished Sentence, and the related films Hungarians and Bálint Fábián Meets God in addition to the above mentioned movies. It is not merely the quality of Fábri’s films and time that have turned them into classics but his style as a director as well: the dramatic story of heroes coming into fierce confrontation related with immense visual expression. It was due to this classic artistic disposition that the majority of his films were screen adaptations of literary works for the most part by classic authors – from Ferenc Molnár to Margit Kaffka, from István Örkény to Tibor Déry, and from Imre Sarkadi to Ferenc Sánta. However, Fábri could be modern when required by the subject-matter, such as the daring achronological narrative format of Late Season or Requiem. In addition to this, he was the mentor of several generations at the Academy of Drama and Film, and, as the president of the Hungarian Film and Television Artists Association, a respected representative of the industry. An impression of Fábri’s personality can be gained from his interpretation of the very becoming role of the politically innocent, oppressed Zoltán Dániel in Péter Bacsó’s satirical film The Witness. Yet the real portrait of the artist Zoltán Fábri as a true author is drawn, apart from the stamp now being issued in his honour, above all by his films.” By Gábor Gelencsér, film critic, associate professor.