The renovated Romanesque Hall of the Museum Of Fine Arts

Magyar Posta is issuing a special souvenir sheet to mark the opening of the renovated Romanesque Hall of the Museum of Fine Arts. Seventy thousand perforated and four thousand imperforate copies of the souvenir sheet designed by the graphic artist György Kara were produced by ANY Security Printing Company.The new issue is available from Filaposta, philately specialist services, certain post offices and www.posta.hu. 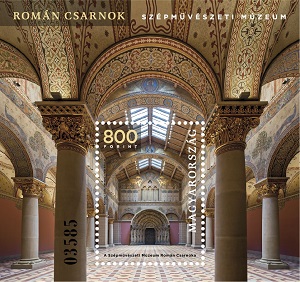 The Romanesque Hall of the Museum of Fine Arts was damaged in 1944 and used as a storage space for 70 years. Although the hall had previously undergone superficial renovations, it is now at last open to visitors in its former glory after the recent complex reconstruction. Apart from restoring the historicist frescoes combining Christian and historic elements, the statues and architectural details inspired by medieval art, the plaster copy of the Golden Gate of Freiberg Cathedral, and the room's entire heating and lighting systems were also fully renovated.
The souvenir sheet provides an overview of the hall with a floor plan of about 900 square metres.The first day cover depicts some of the hall's iconic features such as the statue of the prophet Aaron, the golden apple tree, a peacock, a gilded capital and in a separate image the miraculous stag. Of the signs of the zodiac depicted on the ceiling, Leo has been chosen for the special postmark.