Magyar Posta is commemorating the Roma heroes of 1956 by issuing a special miniature sheet. Fifty thousand copies of the miniature sheet designed by the graphic artist Attila André Elekes were produced by ANY Security Printing Company. The new issue will go on sale from 6 April 2018 and from that date will be available at first day post offices and Filaposta in Hungary but may also be ordered from Magyar Posta’s online store 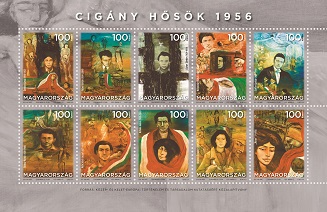 Hungary wrote world history through the 1956 revolution and fight for freedom, which required the nation to unite against the oppressive, dictatorial and deceitful regime imposed on the country. At that time all that mattered was the people who joined together and what they did against oppression. We are commemorating the Roma heroes of 1956, remembering their deeds and honouring their memory, on stamps showing the expressive, dramatic compositions of the Kossuth Prize winning artist of Roma origin István Szentandrássy.

György Cziffra (1921–1994), pianist, one of the best known Hungarian performing artists, who was persecuted by different dictatorships and whose piano playing became a symbol of resistance. He emigrated in 1956 and later did much to support young musicians and artists.

Sándor Csányi (1929–1959), unskilled labourer and freedom fighter, who was freed from prison on 4 November 1956 and immediately joined the Thököly Road armed group, facing the overwhelming Soviet forces. He was sentenced to death and executed.

Gyula Dandos (1938–1957), student and freedom fighter, who was leader of the Revolutionary Students’ Council in Nyíregyháza in 1956. After the revolution was crushed, he was arrested and severely mistreated, and finally, after several attempts to escape, shot by border guards at Szentgotthárd in February 1957.

Gábor Dilinkó “Bijou” (1929–2014), freedom fighter and naive painter, who took part in the fighting in Kisfaludy Street, Corvin Passage and Práter Street, was wounded and then imprisoned for seven years for his actions.

István Fátyol (1934–2004), lighting technician/electrician and freedom fighter, who was one of the leaders of the Terézváros group and then organised resistance in the hospital in Péterfy Sándor Street. He was sentenced to six years in prison and had his entire property confiscated.

Erzsébet Hrozova “Spotty” (1938–2013), weaver, nurse and freedom fighter, who together with her husband joined the armed group in Víg Street in Budapest. She treated the wounded and, when need be, took up arms. Later she was arrested and severely mistreated. She was condemned to death but her sentence was later commuted to life imprisonment. She was released in 1970.

Mátyás Kolompár (1924–1957), who was involved in revolutionary events in Kiskunmajsa and captured. At first he received twelve years in prison but was then condemned to death. He was executed in Kecskemét in October 1957. He left six children.

József Kóté Sörös (1927–1959), itinerant tradesman and freedom fighter, who also fought the Soviet invasion on 4 November 1956 and was wounded in the thigh. He escaped to Austria but returned to Hungary on the promise of an amnesty. He was sentenced and executed in February 1959 at the age of thirty-two. He left three children.

Károly Strausz “Gypsy Charlie” (1928–1986), who joined the Soroksár freedom fighters, organised a separate unit and continued to resist with a handful of men until 11 November. They were among the last resistance fighters in Budapest to lay down their arms. He received the death sentence, which was later commuted to life imprisonment. He was released after fifteen years in June 1974.

Ilona Szabó “Shock-head” (1939?–1956), freedom fighter, who, according to recollections, was just 17 years old and four months pregnant when she became involved in the events of the revolution with her friends. She fought with arms alongside her fiancée Gábor Dilinkó in Corvin Passage. Eventually, she was shot in all probability by the political police in Práter Street on 28 October 1956 and her body thrown into a skip full of waste.