REGIOMONTANUS ARRIVED IN HUNGARY 550 YEARS AGO

Magyar Posta is commemorating the 550th anniversary of the arrival of Regiomontanus in Hungary by issuing a special stamp. 200 000 copies of the stamp designed by the graphic artist György Kara were produced by ANY Security Printing Company. The new issue will be available at first day post offices and Filaposta in Hungary from 3 February, but may also be ordered from Magyar Posta’s online store. 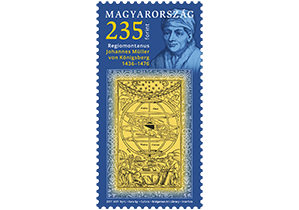 Regiomontanus (1436-1476; original name: Johannes Müller) was a mathematician, astronomer and astrologer. As was the custom at the time, he adopted the Latin name of his town of birth, Königsberg in present-day Germany. He worked and lived in Buda for years, and as a sign of respect for King Matthias,he took the meridian passing through the royal palace in Buda as the basis for his calculations in astronomy. This was the meridian of Buda. Regiomontanus was a child prodigy, and started studying mathematics and astronomy at the age of 11, first in Leipzig and then in Vienna. When he was 12, he calculated the orbits of planets. He was entrusted with the critical translation of Ptolemy’s Almagest, which was later used as a textbook by Copernicus and Galileo. His work on triangles originates from the same period. At the invitation of King Matthias, he lectured at the University of Pozsony (Bratislava), where – half a century before Copernicus – he taught about the motion of the Earth and how the perceived movement of the sky can be used to measure time.In 1467, he travelled to Hungary, where he set up an observatory in the palace of John Vitéz, the archbishop of Esztergom. Between 1468 and 1471, he lived in the court of King Matthias, arranging the Greek manuscripts of the Corvina Library. This is where he wrote his book on astronomy Ephemerides, which was used by Christopher Columbus on his voyage of discovery.In 1471, Regiomontanus left Hungary and moved to Nuremberg. There, he founded a press where complicated mathematical and astronomical calculations could be printed in good quality. He also set up a modern observatory. In 1475, at the request of Pope Sixtus IV, he participated in the work on the reform of the calendar. He died in Rome before being able to complete his work. The official reason for his demise was the black death, but rumour has it that the sons of George of Trebizond murdered him for his harsh criticism of their father’s Almagest translation. There are many signs that only his early death stopped him from taking the decisive step and adopting heliocentrism.

The stamp shows a portrait of Regiomontanus together with a cross-section recalling his work, depicting the Earth and the astrological signs in the middle, the sky on the top, Ptolemy at the bottom left and the renowned scientist at the bottom right. An astrolabe built by Regiomontanus is shown on the first day cover.