Magyar Posta is issuing a stamp of oldtimer cars that were once popular and are now increasingly rare. The miniature sheet was designed by the graphic designer István Weisenburger and 60,000 copies were produced by the banknote printing company Pénzjegynyomda Zrt. The new issue will be available at first day post offices and Filaposta in Hungary from 1 September, but may also be ordered from Magyar Posta’s online store. 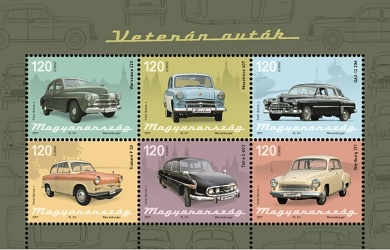 For a car to become an oldtimer does not only mean age but also quality because, besides being at least 30 years old, the condition is that the appearance and almost all the parts of the vehicle type must be in harmony with the original. Some parts may be damaged or worn, and such cars may receive a special OT, i.e. Oldtimer, registration plate ensuring some tax and insurance concessions.

The first stamp of the miniature sheet depicts the Polish Warszawa 220. The car with the characteristic round-back body had been made earlier as the Pobeda M20 in Gorky in the Soviet Union. In total 255,000 Warsawas were made at the Fabryka Samachodow Osobowych plant between 1951 and 1973, and many served as taxis and police and official vehicles.

On the next stamp a Moskvitch 407 is featured. In 1958 the first version of the model with a polished two-tone finish and a chrome grille shell and bumpers rolled off the production line at the Moscow Automobile Plant, where cars were made under the GAZ A badge from 1930 and under the name KIM from 1940. The first Moskvitch model in the 400 series was made in 1947 on Opel production lines installed in the Soviet Union as war reparations. When production ended in October 1963, 360,000 Moskvitch 407s had been made, and a third of these were exported.

Far fewer of the GAZ 12-ZIM were produced than the Moskvitch, which was intended to be a people’s car. The GAZ 12-ZIM was built for protocol purposes and was in fact a stretched, seven-person version of the Pobeda. The American style, slightly baroque-shaped model was introduced in 1949 and by 1959 21,500 had come off the production line in Gorky.

The Trabant, hailed as Eastern Europe’s people’s car, is shown on the fourth stamp. In the era of the post-war steel shortage, the bodywork of the Trabant was made of a plastic called Duroplast. The front wheels of the Trabant P50 were driven by an air-cooled, two-stroke, two-cylinder engine. The first Trabant was made in 1957 and it was unveiled to the public at the Leipzig Fair in the following year. 1,314,000 Trabant P50s were made in Zwickau until 1962. The last of the 3,086,862 Trabants – by then with a four-stroke engine – rolled off the production line on 30 April 1991.

The representative of the former Czechoslovakian automotive industry was the rear-engined Tatra 2-603. This car with three headlights was introduced in 1955 and in 1963 a 2.5 litre, 105 horsepower, petrol-driven version with four headlamps mounted in a flashy chrome grille appeared. More than 20,000 603s were produced until the model was discontinued in 1977.

The two-stroke, three-cylinder, 900cc Wartburg had a liquid-cooled, petrol engine, and was larger and more comfortable than the Trabant. The attractive bodywork of the four-door vehicle, which is still pleasing today, was designed by Hans Fleischer, who had previously worked as a BMW fitter. The 311 Wartburg Limousine was introduced in the spring of 1955 in Leipzig and Geneva, and by 1965 over 130,000 cars were made in Eisenach. The last Wartburg left the factory on 10 April 1991.

Despite the large numbers that were made, these models can hardly be seen on the road today because many were scrapped, thus Magyar Posta’s stamp compilation of these old car types that once defined street scenes but today can only rarely be seen is particularly interesting.