MARIA THERESA WAS BORN 300 YEARS AGO

Austria, Croatia, Hungary, Slovenia and Ukraine are commemorating the tercentenary of the birth of Maria Theresa by issuing a joint commemorative stamp block. The stamp was designed by the Slovenian artist Svetlana Milijaševič and 60,000 copies were produced by ANY Security Printing Company. The new stamp block will be available at first day post offices and Filaposta in Hungary from 12 May 2017, but may also be ordered from Magyar Posta’s online store. 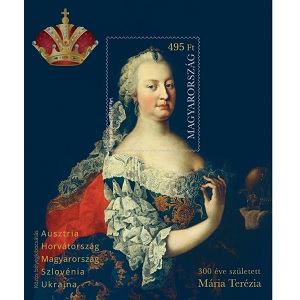 During the nine-hundred-year history of the Kingdom of Hungary, only two queens ruled: Mary, daughter of Louis the Great, briefly in the 14th century, and Maria Theresa in the 18th century.
Maria Theresa of the House of Habsburg (Vienna, 13 May 1717 – Vienna, 29 November 1780), who ruled in Hungary as Mary II and whose German name is Maria Theresia Walburga Amalia Christina von Habsburg, was the second daughter of Charles III and Elisabeth Christine. She was a Princess of the Holy Roman Empire, Archduchess of Austria and Duchess of Hungary, Bohemia and Germany. She reigned as the Archduchess of Austria from 1740 and as the Queen of Hungary and Bohemia, and then by her marriage to the Holy Roman Emperor Francis I of the House of Lorraine, as Holy Roman Empress between 1745 and 1765. She was the “mother” of the House of Habsburg-Lorraine.
One of the most popular Habsburg rulers in Hungary, Maria Theresa came to the throne in dramatic circumstances on 20 October 1740, when her father died without a male heir. Upon his demise Maria Theresa, as his eldest daughter, succeeded to all the Habsburg domains. The months that followed the emperor’s death showed that diplomatic agreements were of little value if they were not backed by striking power as most of Europe attacked her accession by questioning the Habsburgs’ right of female succession. The young Queen, who was just 23 years old, can thank the Hungarian Estates in no small measure for retaining her throne. The War of Succession lasting close to nine years was brought to an end by the Treaty of Aix-la-Chapelle, when Silesia, one of the most developed Habsburg provinces, was ceded. After the treaty, an era preserving the unity and ensuring the peaceful development of the Habsburg Empire ensued.
In the first twenty-five years of her reign diets were held frequently and she consented to palatines being elected in Hungary. The Hungarian Estates were also favoured as the military frontier areas in the southern and south-eastern parts of the country were gradually returned to the control of the Hungarian Viceregal Council and the administration of the Hungarian county system.
Her decrees of enlightened absolutism were of great importance to Hungary as well. These included measures on the double tariff system intending to integrate Hungary into the economy of the Habsburg Empire in 1754, on unifying the duties and labour requirements of the serfs in 1767, on compulsory elementary education in 1777 (Ratio Educationis), on the reforms of the University of Nagyszombat and its relocation to Buda, and the annexation of Fiume to Hungary. From 1765 Maria Theresa ruled by decree without reference to the Hungarian Estates, but throughout her reign she continuously strove to ensure the support of her “loyal Hungarians” through impressive gestures. In 1749 she set up a foundation for the instruction of ten noble Hungarian students at the Theresian Academy in Vienna, established honours (the Order of Maria Theresa in 1757 and the Order of Saint Stephen in 1764), and created the Hungarian noble bodyguard in her own service.
Maria Theresa sought to improve the daily lives and fate of not only the Hungarians but also the other peoples of the multinational polity. As an enlightened absolutist ruler setting practical aims, she laid the foundations of modernity and created further opportunities for development.
A portrait of Maria Theresa painted probably in the mid 18th century by an unknown artist in the style of Martin van Meytens the Younger and kept in the Museum of Military History (Heeresgeschichtliches Museum) in Vienna provides the basis of the design of the stamp issued jointly by the five postal administrations. The silhouette of the Maria Theresa Monument in Vienna appears on the first day cover, while the monarch’s signature has been used for the special postmark.