Magyar Posta is marking the bicentenary of the best-known drama of playwright József Katona (1791-1830), Bánk bán, by issuing a commemorative stamp. The stamp design shows a scene from the play featuring the main characters Queen Gertrudis and Viceroy (‘bán’) Bánk based on a copper engraving by Alajos Rohn. The dramatist’s portrait and signature appear under UV light on the stamp. The stamp was designed by the graphic artist IstvánWeisenburger and produced in 200,000 copies by ANY Security Printing Company. It will be available at large post offices and Filaposta in Hungary from 19 March, but may also be ordered from Magyar Posta’s online store. 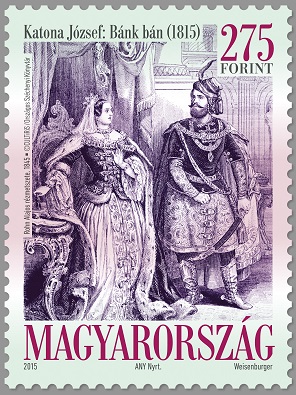 In 1814 the very first issue of the periodical Erdélyi Múzeum (Transylvanian Museum) invited applications in a literary competition entitled ‘Originality and Reward’ based on a Hungarian historical event which do not imitate fashionable western works of the period. The submission deadline for the competition was a year, the end of September 1815. It is presumed that this work by József Katona was created for this competition, although it is possible that he started writing it previously. However, it is certain that the first version of the play was sent to Kolozsvár (now Cluj-Napoca, Romania) in response to the competition. The second, final version of the drama was completed by 1819 and appeared in print in 1820. The drama describes a political and personal conflict in which the viceroy’s wife is seduced and the queen is murdered. There are some major differences between the two versions. The playwright made the seduction more obvious through the use of sleeping powders and narrowed the range of dramatic roles. In addition to these, the drama was improved from the aspect of historical accuracy and the time of the deed was also altered. During Katona’s lifetime the play was not performed due to the censor. Nevertheless, in the 1830s the play’s triumphal march began albeit slowly. Its première was in Kassa (now Kosice, Slovakia) on 15 February 1833. It was performed at the National Theatre in Budapest on 23 March 1839 and then dropped for five years before resuming its place in the theatre’s repertoire in 1845. It was not performed during the years of absolute rule that followed, but a production was eventually staged on 10 March 1858, which launched its unrivalled success. The play’s significance is underscored by the fact that this drama was due to be staged at the National Theatre on the day the revolution for Hungarian independence from Habsburg rule broke out, 15 March 1848, but because of the events it was probably not performed. In 1861 the composer Ferenc Erkel wrote an opera based on Béni Egressy’s libretto of Katona’s drama. (Source: wikipedia.org) 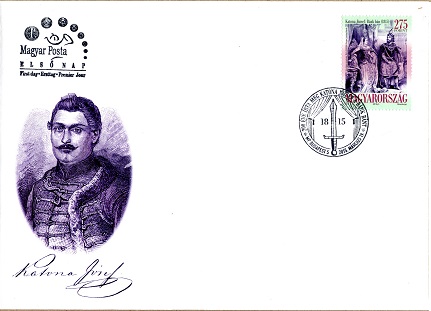