IN MEMORY OF THE GULAG-GUPVI VICTIMS

Magyar Posta is issuing a commemorative stamp in remembrance of the victims of the GULAG-GUPVI. The commemorative stamp with a symbolic concept was designed by graphic artist András Szunyoghy Jr. and 200 000 copies were produced by ANY Security Printing Company. The new issue will be available at first day post offices and Filaposta in Hungary from 1 February, but may also be ordered from Magyar Posta’s online store. 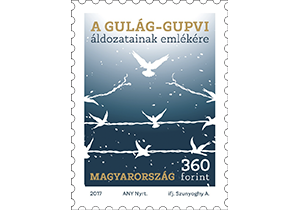 Forced labour camps to suppress the political opposition existed even in tsarist Russia, but these did not form a unified system. After the 1917 revolution, Lenin banished many of his political opponents and detained them in camps. The growing camp system, known throughout the world by the acronym of its Russian name GULAG, reached its greatest extent under the dictatorship of Stalin. In these camps, the Russian and foreign opponents of Stalin’s politics, former prisoners of war deemed unreliable, peasants driven off their land and other forcibly displaced people were compelled to do very hard physical labour. They were made to work 12 hours a day with precious little attention paid to their feeding, health and accommodation. The majority of the approximately 20 to 30 million prisoners were doomed to perish. Fissures appeared in the structure of the Bolshevik labour camp system after Stalin’s death, and it was eventually closed down in the 1960s. In Hungary, at the end of World War II, people were deported from areas occupied by the Red Army. Hungarian military and civilian internees were taken to GUPVI, the camp network for prisoners of war and internees created in 1939, while those found guilty of political offences were sent to the much stricter GULAG camps. Of the approximately 800 000 people deported from Hungary, 300 000 died while they were incarcerated.In order to commemorate the 70th anniversary of the forced labour internments, the Government of Hungary declared 2015 to be a memorial year of political prisoners and forced labourers deported to the Soviet Union. The Commemoration Committee extended the GULAG/GUPVI Memorial Year to the 70th anniversary of the deportation of politician Béla Kovács, member of the Independent Smallholders Party, i.e. 25 February 2017.