History of clothing I.

With the aim of presenting garments of various epochs, the Magyar Posta is launching a new special series of miniature sheet of postage stamps entitled The History of Garments. The first miniature sheets of stamps will present King Louis II and Queen Mary's wedding garments from the collection of the Hungarian National Museum. 80,000 copies of the novelty have been printed by Pénzjegynyomda Zrt. based on the designs made by graphic artist István Weisenburger. The stamp is available at first-day post offices and Filaposta from 8 November, but can also be ordered from Magyar Posta’s online store. 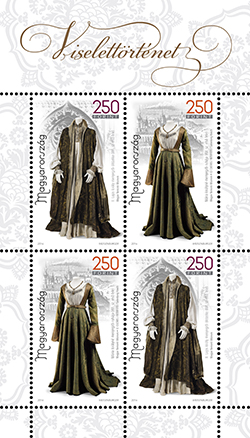 King Louis and Queen Mary's wedding garments can be viewed as part of the National Museum's permanent exhibition. It was in 1928 that the museum acquired the two garments from the Mariazell pilgrimage church in connection with which the Mariazell tradition held that those were the wedding garments of Louis the Great and his wife Elizabeth. However, in 1929, based on the fabric of clothes and the pattern, József Höllrigl, a scientific associate of the museum, found that those clothes were in fact the garments of Hungarian King Louis II and his wife.
The queen's garments followed the German Renaissance fashion typical of the first half of the 16th century: it was tailored from a green rosette-pattern Italian damask, was decorated with gold brocade and embroidered with gold and silver thread. The waistline was lifted and the upper part was made narrow and wide open. The skirt with a pleated waist expands towards the bottom into a barge skirt. The ends of the narrow sleeves are decorated with funnel-shaped cuffs covering also the hands. In its appearance, the royal mantle reflects the contemporary Hungarian tastes. An interesting fact related to the garment is that its front part is shorter and the back part is longer, which adds to the majestic appearance of the young king both when seated on a horse and when kneeling before the altar during the ceremony. The overcoat was made from silk brocade woven on both sides. It was a special technical accomplishment that the outside was patterned with gold, while the inside with silver. The shirt was made of fine woven fabrics of flax.