Frank Sinatra was born 100 years ago

Frank Sinatra was born 100 years ago

Magyar Posta is issuing a special stamp to commemorate the centenary of the birth of the American actor and singer Frank Sinatra, who won eight Grammy awards, three Oscars and several Golden Globe awards. The stamp design features the famous performing artist’s portrait. Fifty thousand copies of the miniature sheet containing four identical stamps and designed by the graphic artist Ágnes Berta were produced by the Pénzjegynyomda printing company. The new issue will be available at large post offices and Filaposta in Hungary from 8 May, but may also be purchased from Magyar Posta’s webshop. 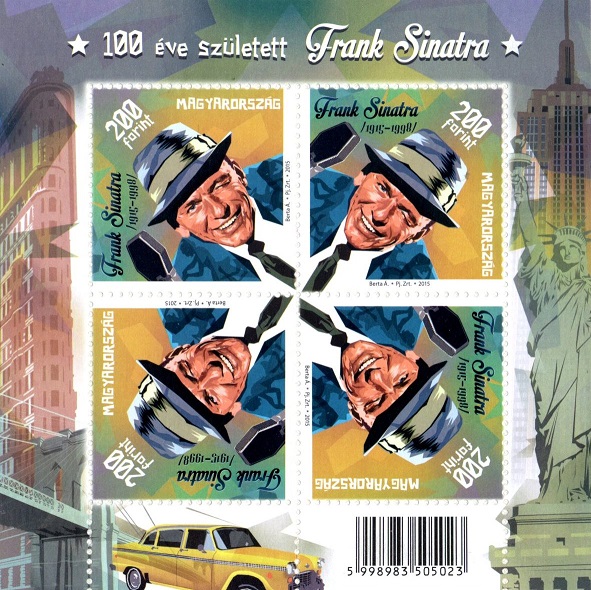 Francis Albert Sinatra (1915–1998) was the only child of Italian immigrants. He left school to start singing when he was 16 years old. He won a talent show with the Hoboken Four but left the group seeking an independent career and began working as a singing waiter in a small restaurant. His real career started with Harry James and Tommy Dorsey in the late 1930s. He became a successful solo singer in the early to mid 1940s. In the 1950s his appeal waned but his career gained new momentum in 1954, when he won the Oscar for the best supporting actor for his performance in From Here to Eternity. He signed a contract with Capitol Records, where he recorded a series of highly successful albums. In 1960 he founded his own label, Reprise Records. In the 1960s he appeared in many TV shows dedicated to him and took part in a world tour. In the same decade he received 6 Grammy Awards for two of his albums and produced his greatest hits. By the end of the 1960s his popularity was declining, so he gave a farewell concert on 14 June 1971, but made a comeback with a new album just two years later. Sinatra spent most of the 1970s and 1980s giving concerts, but also produced a few albums. In 1994 he received a Grammy Lifetime Achievement Award. He last appeared in public at the end of 1995. Frank Sinatra died of a heart attack. Throughout his life he struggled with mood swings and bouts of depression due to bipolar disorder, commonly referred to as maniac depression. He released over 70 LPs and almost 300 singles during his life, and he appeared in several compilation albums after his death. (Source: wikipedia.hu)