Magyar Posta is continuing its decades-long tradition of issuing stamps with a surcharge in order to support youth stamp collecting again in 2017. The theme this year is the bicentenary of the birth of János Arany, which is linked with the János Arany Memorial Year. Magyar Posta devotes the amount of the surcharge on two stamps of the four-stamp miniature sheet, a total of HUF 150, to supporting youth stamp collecting. 30,000 copies of the miniature sheet designed by the graphic artist Gergő Gilicze were produced by ANY Security Printing Company and will be available at first day post offices and Filaposta in Hungary from 10 July, but may also be ordered from Magyar Posta’s online store. 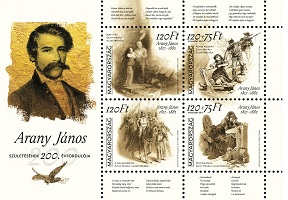 János Arany (Nagyszalonta, 2 March 1817 – Budapest, 22 October 1882) is one of the best known and most outstanding figures in Hungarian literature. His literary career began in 1846 with the satirical epic poem The Lost Constitution but it was only when Arany’s major epic poem Toldi won the Kisfaludy Society’s prize in 1847 that he became truly well-known. Toldi won him not only a prize but also the friendship of another celebrated poet of the age, Sándor Petőfi, and their correspondence is a highly valued part of Hungarian literary history.

Arany was involved in public life even at the start of his career and wrote articles on politics. He served as a member of the national guard during the 1848 Revolution and War of Independence, and then worked drafting documents in the Ministry of Internal Affairs led by Bertalan Szemere. After the fall of the War of Independence, he went into hiding for a while but, as he had not played a significant political role, he avoided the reprisals and moved to Nagykőrös, where he taught in the grammar school between 1851 and 1860. There the poems representing the first peak of his poetry were written, including his ballads drawing on Transylvanian and Scottish folk traditions. This was his most productive creative period and it was because of these works that he was invited to become the director of the Kisfaludy Society and later a member and then the secretary general of the Hungarian Academy of Sciences.

He was considered immortal even during his lifetime. In his great epic works – the Toldi trilogy and The Death of King Buda – and in his ballads crafted to artistic perfection, he raised the depiction of the inner person to the standard of the world literature of his age. He acquired great intellectual versatility and became highly erudite, reading the masterpieces of Latin, Greek, German, English and French literature in the original. His translations of Shakespeare are classics in their own right today.

Arany was a true master of the Hungarian language and had an unparalleled vocabulary. His poetry contains almost 60,000 individual words, and over 16,000 if conjugated and inflected forms are excluded, which means that he can be considered the Hungarian poet with the richest vocabulary.

The basis of the stamp designs were illustrations by Mihály Zichy, a contemporary painter, made for Arany’s four ballads – The Hero of Bor, Mistress Agnes, The Bards of Wales and The Mother of King Matthias. The frame is decorated by quotations from the ballads and the elements profiling the János Arany Memorial Year, which also appear on the first day cover. The poet’s signature is used for the commemorative postmark.