In its latest stamp denomination release Magyar Posta pursues a theme which is considered to be a classical one among collectors: from among the protected birds living in Hungary five owl species are presented. The stamps have been produced by the ANY Biztonsági Nyomda Nyrt. based on the designs created by graphic artist Kálmán Székely. The stamp set which has been published in 200,000 copies and the stamp block which has been published in 60,000 copies will be available from July 3 at first day post offices and Filaposta, but may also be ordered from Magyar Posta’s online store. 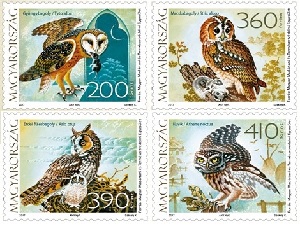 Night animals that fly noiselessly, stare into the world with their huge eyes, with a head turning in an extraordinary way and making characteristic sounds – owls are among the most beautiful and most exciting representatives of the birdlife. Many would like to have more such birds in their environment. The common feature of the species which are featured on the stamps is that they are most commonly seen and heard by humans, therefore, their existence much depends on the goodwill and attitude of ordinary people.

The barn owl (Tyto alba): A bird that lives in hiding and whose habitat is in church towers, attics, livestock farms and granaries. It favours open farmland, and thus this bird is linked to human presence. It avoids closed forests as well as altitudes above 3,000 metres. Two subspecies of this owl live in Hungary: the subtype with a yellowish, orange-yellowish breast is the most common, while the white-breasted type that is common in Western Europe is very rare and can mostly be seen in Southern Transdanubia. Crossbreeds of the two subspecies can also be observed. It is easily recognisable from its heart-shaped face veil. Its iris is dark.

The tawny owl or brown owl (Strix aluco): A medium-sized bird. It has no ear tufts. There are two colour variations: grey, which is more common, and the reddish. Its iris is dark, and it makes its characteristic, ghastly hooting voice heard after dusk. Its nutrition is quite varied: from among the small mammals it eats primarily forest mice and forest voles, but it also likes hunting other voles, shrews, pelts and birds.

The long-eared owl (Asio otus): The most common owl in Hungary. It is generally common in Hungary, but it avoids high-lying, closed forests. It is a medium-sized bird with long ear tufts. These owls often survive winters by finding shelter in settlements, usually in evergreen trees. Often there are dozens of owls that spend the day on a pine tree, then at dusk they go hunting. The stock in Hungary is stable.

The little owl (Athene noctua): It is common in Hungary, especially in the farmland and agricultural areas of the Great Hungarian Plain. It is partly active in the daytime, therefore, it is more commonly seen than other owls. It flies in a wavy way, similarly to the woodpecker. If disturbed, it waggles up and down in excitement. The little owl eats mainly small mammals and songbirds, but it can catch small reptiles, amphibians and insects as well. Due to the transformation of agriculture, the decline of farms and the decline of livestock farming, its habitat is shrinking.

The scops owl (Otus scops): This is the only owl that lays eggs in Hungary and is migratory. The scops owl spends the winter in Africa, returning to Hungary in the second half of April, and by the beginning of September the vast majority of the population already flies away. During brooding it feeds on insects. Its plumage is similar to a tree’s bark, thus it can easily hide in the tree. It is active at night. In a resting state, it flattens its ear tufts.

The peculiarity of the stamp graphics is that the designer has portrayed the birds with the animals that are typically their food. The first day envelope shows a composition of feathers of a long-eared owl.