In line with its tradition, Magyar Posta is celebrating Easter, the largest feast of Christianity, by issuing a postage stamp. The stamp and the special envelope reveal the artwork - and a detail of the artwork - entitled Christ's sepulchral shroud, created by artist and textile artist Erzsébet Szekeres. The philatelic publications were produced on the basis of designs created by graphic artist László Tóth as self-adhesive stamps at the Pátria Nyomda Zrt. The novelty will be available from March 6 at first day cover post offices and at Filaposta, and can also be ordered from Magyar Posta’s online store.

Easter is the feast of celebrating Jesus' death and resurrection, mankind's redemption. According to the Bible, Jesus Christ was crucified on a Friday, and his resurrection happened on the third day, a Sunday. With his death on the cross, he redeemed the sins of every man, and his resurrection was a victory over death. In 2017, both the Eastern and the Western churches will celebrate Easter on the same day, April 16. 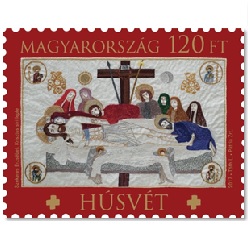 The history of the sepulchral shrouds dates back to the 12th century. According to Hans Belting, a great Byzantium-researcher and art historian, the late-medieval funeral depictions favoured by Byzantine Greeks were inspired by the Shroud of Turin. The sepulchral shroud used in the Byzantine Easter liturgical services - in Greek: epitáphios or epitáphion - is the icon of dead Christ and of his placement into the grave embroidered or painted onto fabric. Today, mainly as a depiction of putting Christ into the tomb, during the Good Friday Vespers - with the involvement of laity - a priest carries it in a solemn procession, then places on a prepared place, the holy grave, in the middle of the church. On Holy Saturday, on the occasion of the resurrection ceremony, it is taken over to the main altar where, for 40 days, it stays on the altar table until the feast of the Ascension of Christ.

Erzsébet Szekeres: Her work entitled Christ's sepulchral shroud can be seen in the Greek Catholic Church of the Holy Cross in Gödöllő.