Magyar Posta is celebrating Christianity’s most important feast, Easter, by issuing a definitive stamp. The self-adhesive stamp with no value indication, bearing the inscription “Domestic”, and the first day cover show El Greco’s painting Resurrection. The stamp was designed by the graphic artist Barnabás Baticz and produced at the Pátria Printing House.The new issue is available from Filaposta, philately specialist services, certain post offices and www.posta.hu. 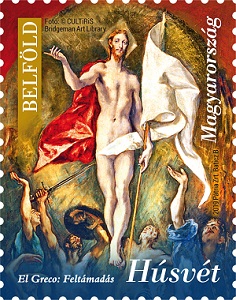 El Greco, the painter of Greek origin, was born on the island of Crete around 1541. He studied in Venice for a short while but spent most of his life in Spain and more specifically in Toledo. He signed his work using his original name Domenikos Theotokopulos, but he was and is simply known as the Greek, El Greco. He learnt the basics of painting from Titian. His work was also influenced by Tintoretto and Michelangelo, yet he developed his individual style at an early stage. His art is characterised by drama, ecstasy and the elongated depiction of the human figure.In the centre of the stamp is a part of the painting focusing on the risen Christ, while the first day cover shows the entire work.