CLAUDIO MONTEVERDI WAS BORN 450 YEARS AGO

Magyar Posta is issuing a commemorative stamp in honour of the 450th anniversary of the birth of the well-known composer Claudio Monteverdi. Sixty thousand copies of the miniature sheet designed by the Kossuth Prize winning graphic artist István Orosz were produced by Pénzjegynyomda Zrt. The new issue will be available at first day post offices and Filaposta in Hungary from 6 March, but may also be ordered from Magyar Posta’s online store.

Claudio Monteverdi (1567–1643) was an Italian Baroque composer, teacher and conductor, the first master of 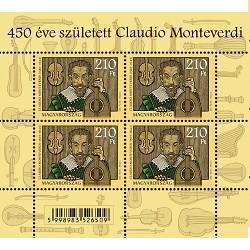 opera. He studied under the supervision of the maestro di cappella at the Cathedral of Cremona and composed his first work at the age of fifteen. In 1590 he entered the service of Duke Vincenzo I of Gonzaga in Mantova. In 1599 Monteverdi got married. The Duke travelled a lot and took Monteverdi with him on his journeys. Although Monteverdi was officially employed as a simple gambist, he soon became the de facto director of music at the ducal court. He was paid poorly and irregularly. He composed his first opera, L’Orfeo, which was commissioned by the Accademia degli Invaghiti in 1607. The opera was presented at a private performance and reaped such success that the Duke ordered another opera for his son’s wedding the following year. The première of L’Arianna was also received with great acclaim. Meanwhile, Monteverdi suffered a tremendous loss, the death of his wife. He never married again and brought up his two children by himself. In 1612 he left the court. The following year he was offered the post of conductor at San Marco in Venice, which he accepted. He soon came to like the dynamically developing city, where he was held in higher esteem than in Mantova. As the conductor he had more duties, but he was paid better and was his own master. Although the ducal court attempted to entice him back to Mantova several times without success, he composed works for them upon request. At the end of the 1630s, the first public opera houses opened in Venice, and Monteverdi became a sought-after composer. He wrote a number of operas at this time but only two survived, Il ritorno d'Ulisse in patria (The Return of Ulysses) and L’incoronazione di Poppea (The Coronation of Poppea). The ageing maestro became unable to fulfil his duties, and he died in Venice in 1643. In addition to his musical dramas, Monteverdi’s secular vocal works and ecclesiastic compositions are still an integral part of the concert repertoire.