CHINESE HOROSCOPE: 2018 THE YEAR OF THE DOG

According to the Chinese horoscope, the period between 16 February 2018 and 4 February 2019 is the Year of the Dog, which is illustrated by Magyar Posta on a small stamp sheet. The main motif of the two different stamp images is the figure of a dog. The small sheet was produced in 70,000 copies in Pénzjegynyomda, based on the design by Kálmán Székely, graphic artist. The new issue will be available from 6 February at first-day post offices and Filaposta in Hungary, and it can also be ordered from Magyar Posta’s online store . 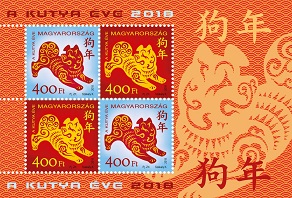 For thousands of years, Chinese astrology has been describing people’s characters and expected future on the basis of the motion and phases of the Moon. Due to the different calculations of time applied by the lunar calendar and the solar – Gregorian – calendar, New Year’s Day is on a different day (based on the solar calendar) every year. In 2018 it is on 16 February.
In the Chinese horoscope other factors can also be allocated to the time of birth, such as the hour of birth, and the characteristics of the given year, month, day and hour suiting the five elements (water, wood, fire, earth and metal). There are 60 different possible combinations in which the Ten Heavenly Stems and the Twelve Earthly Branches can be paired, and the most important cycle of the lunar calendar is the 60-year cycle. In Chinese astrology, the qualities and correlations valid at the moment of birth determine the line of one’s fate. Due to this cyclic nature, the year about to start will be the Year of the Earth Dog. However, the Chinese calendar system is much more complex than this, as it is also combined with the so-called Four Pillars of Destiny reading, where the year, month, day and hour of birth is taken into consideration, as well as the 5 elements and the attributes of yin and yang. The Twelve Earthly Branches also correspond to the Twelve Zodiac Signs, and with the help of these animals the behaviour of the fundamental elements of people and the world can be analysed, together with the patterns and the cycle of nature based on 60-day and 60-year cycles.

People born in the Year of the Dog are closely attached to those with whom they share their professional or private life, because they try to avoid being alone. They have a friendly nature, despite the fact that they see the world exclusively in black and white: people are either their friends or their enemies. They do everything for their friends, but as they try to avoid conflicts and do not like difficult situations, they remain as far away from their enemies as possible. Although basically they have a pessimistic attitude, they never show it. They are very popular in their environment, mainly for their kind manners and spontaneity. They are the best employees: considerate, loyal, intelligent, fair, and they do not spare their energy. They always do what they are expected to, and they also pay attention to the results of the work done. They know how to deal with people and they have a talent for business. They are excellent performers in the financial field, in social care, in medical sciences and in education. They are the most faithful partners, their love is endless. Specifically, people born in the Year of the Earth Dog are characterised by being quiet and reserved in nature, while they can be extremely convincing and talented at the same time. Generally, they are greatly admired and highly respected.

This zodiac sign represents intelligence and protection, so the coming year may be a sensitive period. Probably there will be a strong focus on the issue of protection, as the zodiac sign of the Dog is an important defender of rights and possession; consequently, the maintenance of the law, security and order will be a key issue in the new year. At the same time, 2018 will also be the year of high hopes, when significant attempts will be made to confine the disputed issues all over the world within controlled channels.

Magyar Posta plans to continue the series in 2019 by issuing a stamp on the Year of the Pig.