Magyar Posta is marking the 150th anniversary of the birth of the painter Béla Iványi Grünwald (6 May 1867 – 24 September 1940). Sixty thousand copies of the miniature sheet designed by the graphic artist Barnabás Baticz were produced by the banknote printing company Pénzjegynyomda Zrt. The new issue will be available at first day post offices and Filaposta in Hungary from 5 May 2017, but may also be ordered from Magyar Posta’s online store. 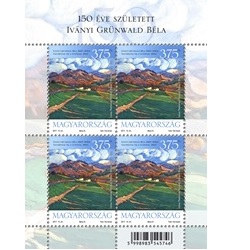 Béla Iványi Grünwald was a leading figure in Hungarian painting. His oeuvre divides into three main periods: from 1889 to 1909 the characteristic traits of the artists’ colony in Nagybánya (today Baia Mare, Romania), while in the next period endeavours to stylise are evident in his paintings, and then, after the 1920s, the signs of impressionism fused with the influence of the Great Plain painters appear in his works.
Béla Grünwald was born in Darázs-puszta near Som in Somogy county. One of seven children, his father supported the family cultivating rented land. He completed his schooling in Székesfehérvár as a private student and then he went to Budapest, where his parents enrolled him at the Academy of Fine Arts in 1882 under the tutelage of Bertalan Székely. After graduating, like many of his famous predecessors, he studied abroad, developing new skills briefly in Munich in 1886 and at the Académie Julian in Paris in 1887. He exhibited from 1889 onwards and his first major work painted in 1890 was Sword of God, which was inspired by the origin legend of Attila. In 1892 he returned to Munich with Károly Ferenczy, where he joined the circle of Simon Hollósy, who influenced him greatly. In 1893 he painted a large-scale genre painting Nihilists Drawing Lots, which is in the Déri Museum in Debrecen today. For the 1896 Millennium Exhibition he painted a huge picture After the Mongol Invasion. He was one of the founders and teachers at the Nagybánya artists’ colony, where he worked from 1896. In the paintings he made there he dealt with the problem of plein air, and his art was mainly influenced by Károly Ferenczy. It was at this time he adopted Iványi as part of his surname. His best works include Moonrise (1896), Watering (1902), one of the most beautiful Hungarian landscapes with a bright mood, and Spring Excursion (1903). From 1907 he shifted away from the strict principles of naturalism of Nagybánya and experimented with more decorative and stylised Secessionist painting. His large decorative composition Feast (Spring) was painted in 1909. After Nagybánya, in 1907 he moved to Kecskemét, where he led and taught at the local artists’ colony. There he created more large decorative compositions: allegorical groups for the facade of the Casino gentlemen’s club in Kecskemét (1912) and Spring Awakening (1913). After the First World War he moved to Lake Balaton, where he linked with the tradition of Mihály Munkácsy and László Paál, painting simply executed, realistic landscapes and at the same time working on a state commission for a monumental historical canvas for the assembly hall of the University of Debrecen. The stamp design features the artist’s painting Nagybánya Landscape with the Gutin Mountains, which hangs in the Modern Hungarian Gallery of the Janus Pannonius Museum. The first day cover uses a detail of the painting Self-Portrait in the collection of the Hungarian National Gallery and the special postmark symbolises an easel. Of the founding masters of the Nagybánya artists’ colony, Iványi Grünwald’s art followed the changes of style of the volatile period the most flexibly and his captivating use of colour makes him one of the Hungarian painters with the most varied oeuvre. He won numerous international exhibition prizes and state honours. Today his works are to be found in a number of well-known museums and private collections.