Magyar Posta is marking the centenary of the premiere of Béla Bartók’s opera Bluebeard’s Castle by issuing a commemorative souvenir sheet. Seventy thousand copies of the souvenir sheet designed by the graphic artist György Kara were produced by ANY Security Printing Company. The new issue will go on sale from 2 March 2018 and from that date will be available at first day post offices and Filaposta in Hungary but may also be ordered from Magyar Posta’s online store. 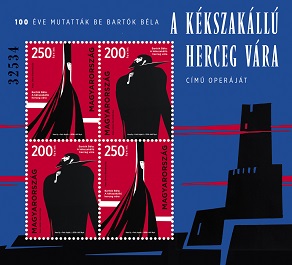 Béla Bartók (1881-1945) was a composer, pianist and ethnomusicologist who collected Central European folk music. One of the classics of 20th-century composing, he is the greatest Hungarian composer alongside Franz Liszt. As an ethnomusicologist, together with Zoltán Kodály, he laid the foundations of folk music collection in Hungary. His art and academic achievements were of major importance not only in terms of Hungarian and European music history but as part of universal culture. For over twenty-five years he taught piano at the Academy of Music in Budapest, in addition to which he also gave regular concerts throughout Europe.

Bluebeard’s Castle is Béla Bartók’s only, one-act opera, whose libretto was written by the poet Béla Balázs. The music and text form a close-knit unit, both being founded on ballads and folk music. Bartók’s music was inspired by an old type of musical style discovered in Transylvania, which enchanted him. Using the pattern of pentatonic folk songs, the dark tones provide the theme for the cold and austere castle and Bluebeard himself, representing the male soul. There are no duets and arias in this opera, only the dialogue of the two characters is heard throughout. The music emphasises and refines the representation of their emotions, and strengthens the visual experience.

The opera was first performed on 24 May 1918 in the Hungarian Royal Opera House but was taken off the programme after eight performances. It was revived from 1936 onwards, then with great success, and that is when it began to gain international recognition.

The stamp uses reproductions of the illustrations of the Kossuth-Prize-winning graphic artist János Kass. In addition to the rich symbols, the strong, solid colours, the block-like shapes of the characters, the freeze-framed facial expressions and the contrasts heighten the dramatic tension between picture and sound. The stamp, first day cover and special postmark depict transcendent visions from the world of imagination and reality about being withdrawn and breaking out from the prison of the soul. The illustrations of János Kass exist independent of the music and the text,as autonomous graphic works in their own right.