The stamps are available in our webshop as well.

Magyar Posta is celebrating the 150th anniversary of the opening of the Budapest Zoo and Botanical Garden by issuing a special stamp block. The composition shown on the stamp block was inspired by the illustrations included in the publication by Count Kálmán Lázár entitled Körút az állatkertekben (Zoo tours). The stamp block was produced by ANY Biztonsági Nyomda Nyrt., based on the plans by Tibor Zoltán Petényi. The new products are available from 9 August at first day cover post offices and at Filaposta, and they can also be ordered from Magyar Posta's webshop. 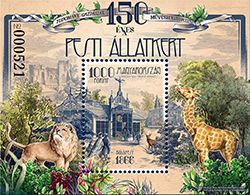 The idea of opening a zoo first emerged around 1820-30, but the events that took place in 1848-49 and the following period did not help the realisation of the zoo. Finally, at the initiative of a few scientists, the idea was followed up by action. Among the "founding fathers" were József Szabó, geologist, Ágoston Kubinyi, the Director of the National Museum, József Gerenday, the Director of the Botanical Garden of Budapest and János Xántus, a recognised zoologist and ethnographer, who then became the first director of the Budapest Zoo. On 9 August 1866 the first Hungarian zoo opened its gates to the sound of the midday bell. Besides Hungarian species the zoo housed several rare species of monkeys, lemurs, parrots, camels, kangaroos and other special animals. The first lion house was opened in 1876 with lions and tigers. An elephant, a hippopotamus and a rhinoceros joined later on. From 1873, during the mandate of director Károly Serák, performing artists were also invited, who attracted even more visitors. In 1907 the operation of the zoo was taken over by the capital city of Budapest, and more than four million gold crowns were spent on its complete reconstruction. The zoo was reopened on 20th May 1912 with a new director called Adolf Lendl, a zoologist. Most of the historic buildings of the park were opened in those days. The institution was one of the most beautiful and modern zoos in Europe. However, it was nearly completely destroyed in World War I, by the subsequent economic crisis series and then in World War II. Despite this, on 1 May 1945 it opened its gates again with a mere few dozen animals and dilapidated buildings. The war damage was restored step by step, and soon major modernizations and developments could also be realised. The 1970s and 1980s were primarily determined by constraints, so renovations did not take place until the change of the political regime. Since then the listed buildings have been reconstructed and now they can be seen in their old splendour again. The dwelling places of the animals have been modernized and made to look more aesthetic to the visitors too. The reconstruction work affected every square centimetre of the zoo. By now the zoo has become a real oasis in the heart of Budapest. As a result of the developments currently in progress, visitors can have further unique experiences again soon.