Magyar Posta presents on a stamp the field elm (Ulmus minor), a tree species whose wood can be put to a great variety of uses and which was once regarded as a holy tree. The field elm was chosen Tree of the Year 2016 by the National Forestry Association. Three hundred and fifty thousand copies of the stamp designed by the graphic artist Attila Elekes were produced by the Pénzjegynyomda printing company. The new issue is available at first-day post offices and Filaposta in Hungary from 8 September, but may also be purchased from Magyar Posta’s online store. 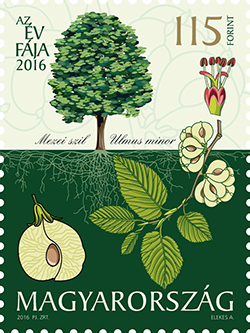 The purpose of The Tree of the Year initiative is to highlight tree species that deserve care and protection due to their considerable importance in forestry yet do not receive the attention they merit. The National Forestry Association started the movement following the German example 20 years ago. The field elm is indigenous to a large part of Europe but prefers warmer flat or hilly areas and only occurs at lower altitudes in more mountainous regions. Its typical habitat is broad-leaved forest. The field elm can grow to a height of 30 metres. Its wood is extremely hard, flexible, difficult to split and tough. These characteristics make it suitable for shipbuilding and underwater structures as well as building, rivalling oak. Carriage-makers, cabinetmakers, tanners and pipe-makers also readily worked with it but it was used in folk medicine as well. Its foliage was used as fodder for ruminant animals. The field elm easily regenerates from coppicing, sprouting from stumps and roots.
The National Forestry Association was founded on 9 December 1866 in Pest as the successor of Ungarischer Fortsverein, which was established in 1851. The Association played an influential role in the development of forestry terminology and literature in Hungarian as well as in advances in specialist areas. An outstanding personality in the Association was its secretary at the time of its foundation and then its first vice-president, Albert Kálnoki Bedő (1839-1918), who was elected honorary president on the 50th anniversary of the Association’s foundation in 1916. Since 1957, the Albert Bedő Medal has been awarded in memory of him every year.