CHINESE HOROSCOPE: 2017 THE YEAR OF THE ROOSTER

According to the Chinese zodiac, the period between 28 January 2017 and
15 February 2018 is the Year of the Rooster, which Magyar Posta is celebrating by issuing a miniature sheet. The main motif of the two stamps is the rooster. Embossing and the use of gold foil make the composition special.The miniature sheet was designed by graphic artist Tibor Zoltán Petényi and 70000 sheets were produced by ANY Security Printing Company. The new issue will be available at first-day post offices and Filaposta in Hungary from 27 January, but it may also be ordered from Magyar Posta’s online store. 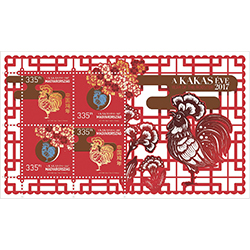 According to Chinese astrology, events of historic importance bringing the dedicated work of previous years to fruition are to be expected in the Year of the Rooster. As regards the economy, slow but steady growth based on solid grounds can be counted on.The average person can look forward to a useful and productive year. Many will turn towards a balance of mind and body, and staying healthy will be an important consideration. This period will favour people who are willing to work hard and are ready to exploit their own talent and opportunities. People born in the Year of the Rooster like strutting like a rooster and are brave, proud, conspicuous and outspoken. They long for acknowledgement and like being noticed, and are industrious and vivacious. Roosters need an audience and admirers asking for their advice. As they cannot tolerate being contradicted, they also have enemies. They are uncompromising in disputes and often offend their opponents. Roosters read a lot and take notice of novelties. The signs of the Chinese zodiac are repeated every 12 years. The last Year of the Rooster was in 2005 and the next will be in 2029. The series is planned to continue with the release of the Year of the Dog stamp in 2018.