Between 29 June and 1 July 2018 Nagykőrös will host the events of the 91st Stamp Day and the HUNFILA 2018 – 650TH ANNIVERSARY OF NAGYKŐRÖS, TOWN OF JÁNOS ARANY National Stamp Exhibition. Magyar Posta is issuing its traditional two-denomination set of stamps and a souvenir sheet with a surcharge for this year’s Stamp Day. The HUF 300 surcharge on each sheet will be devoted to supporting organised stamp collecting in Hungary. The new issues designed by the graphic artist Barnabás Baticz were produced by ANY Security Printing Company and will be available at the exhibition venue, first day post offices and Filaposta in Hungary from 29 June 2018, but may also be ordered from Magyar Posta’s online store. 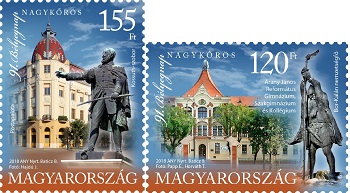 Nagykőrös has a distinctive market town identity and is located in the south-east of Pest county in the middle of the Great Plain. The small town, which today has almost 25,000 inhabitants, was first mentioned in a charter of Béla IV in 1266 and it is thought that the town was named after the many ash trees that once grew there (“kőris” in Hungarian, hence Nagykőrös). Today, green shady parks and the proximity of nature still define the identity of the town, whose built heritage, outdoor artworks, museum collections, age-old market traditions, lively festivals, and secular and ecclesiastical institutions make this a pleasant and attractive place to live.

In 2018 there is a variety of events to celebrate the 650th anniversary of the town’s foundation, which includes the 91st Stamp Day. The stamp set and souvenir sheet together with their first day covers feature a selection of the town’s noteworthy buildings and outdoor artworks.

This is the town of one of Hungary’s greatest poets, János Arany, who taught here between 1851 and 1860. These nine years were the community’s most distinguished cultural period, and thus the impressive Art Nouveau building of the Arany János Reformed Church Secondary Vocational School and College appears on the HUF 120 stamp of the stamp set. When the Magyar tribes settled in the Carpathian Basin, the Nagykőrös area was occupied by the Bor-Kalán clan, and thus the statue of the clan chief, Bor-Kalán, by Imre Varga can be seen in the foreground of the design. Another Art Nouveau building, the three-storied Postal Palace with a coloured dome, can be seen on the HUF 155 stamp. The name of the building, which is still used today, refers to the post office that it once housed. In the foreground of the stamp is a statue of Lajos Kossuth, unveiled in 1900, which recalls the statesman’s rousing speech during the 1848 revolution against Austrian rule, after which 1,500 citizens of the town joined the liberation army. 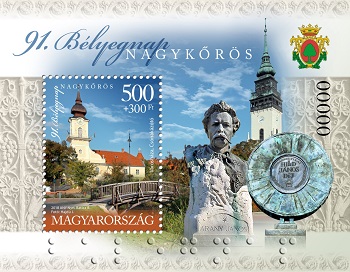 The souvenir sheet shows the Town Hall with its distinctive fire watchtower as well as the town’s restored boating lake, which gives a romantic feel to the area surrounding the building. Other parts of the composition are the 62-metre-high tower of the Reformed Church, a detail of Alajos Stróbl’s statue of János Arany, the outdoor artwork of the Hild János Prize, awarded to Nagykőrös in 2014, the arms of the town, and the grape motif adorning the column supporting the statue of János Arany. The special feature of the souvenir sheet is the Braille inscription “Stamp Day” in the bottom part of the frame.