500 YEARS OF THE REFORMATION

Magyar Posta welcomes the 500th anniversary of the Reformation by issuing a two-denomination stamp set and a stamp block. The set has been produced in 200,000 copies, while the block with a black serial number in 60,000 copies by ANY Biztonsági Nyomda Nyrt. based on the artwork created by graphic artist Imre Benedek. The new issue will be available at first-day post offices and Filaposta from 20 April, and may also be ordered from Magyar Posta’s online store. 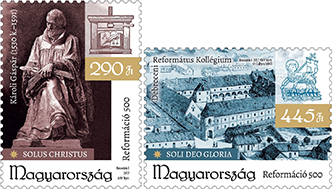 31 October 1517 is the already historic date when Martin Luther pinned his Ninety-five Theses on the door of the Wittenberg Castle Church, which brought a series of reforms not only within the Christian religion, but also in all areas of life. While Luther's action transformed Europe's contemporary religious map and renewed the world of faith, the beliefs and ideas established by him reach far beyond the boundaries of theology. The impact Luther and the reformers later on as well as the Reformation had can be traced also in the emergence and transformation of politics, economics, music, law, mother tongue and modern science.
The Hungarians are particularly affected by the impacts of the Reformation since, according to the historians of our time, if in the 16th century this revival had failed not reach the Hungarian Kingdom - Europe's easternmost territory concerned, today we would probably not use the Hungarian language any more. In those times, the country divided into three parts and the national re-unification efforts favoured the spread of the Reformation among the whole Hungarian people. From then on the new religion became a national cause against the repressive policies of the Catholic Habsburgs, and greatly contributed to the spectacular early modern evolution of the Hungarian language and literature.
The half-millennial anniversary is not limited only to Hungary or Europe, as today there is almost no country in the world where one would not be able to find Protestant religions which trace themselves back to the Reformation, and the number of believers currently exceeds 800 million people.
The HUF 290 denomination of the commemorative stamp set shows the statue of Gáspár Károli who was first to translate the Bible into the Hungarian language and a stylized printing machine, as well as an open Bible. The composition also contains the Latin inscription of ‘Solus Christus’ (Christ alone). The HUF 445 denomination shows the building of one of the most important educational institutions of the Hungarian Reformation, the Reformed College of Debrecen from 1802, as well as the coat of arms of the Hungarian Reformed Church. At the forefront of the artwork is the Latin inscription of ‘Soli Deo Gloria’ (Glory to God alone). The background of the block shows Luther's handwritten will kept in the Evangelical National Archives and a detail of the Wittenberg Castle Church; in the foreground of the artwork the Five Solas (basic theological beliefs of the Reformed tradition) can be seen, while - in addition to Martin Luther’s coat of arms - based on a 19th century coloured engraving, the stamp depicts the iconic moment when Luther is pinning his Five Theses on the door of the Wittenberg Castle Church. The first day covers of the set of stamps and of the block of stamps have been produced with the same artwork, the detail of the said will and a composition of the pictorial representation of the Five Solas.
The Reformation is not only the reminiscence of the 16th century, but is a common heritage for all of us, an essential element of which is the ongoing renewal.