Magyar Posta welcomes the 34th racing pigeon Olympiad organised in Budapest between 15–18 January 2015 by issuing a commemorative stamp block and a set with two denominations. On one of the denominations of the numbered block containing two stamp designs of the same size but of different orientation, a former Olympic champion racing pigeon of Hungarian breed named Jr Villám(Lightening Jr) can be seen, while on the other stamp design a moment of a pigeon toss is captured, and this scene extends into the frame design of the block. On the denominations of the set former Olympic champion pigeons of Hungarian breed can be seen, as well as a famous sight of Budapest. On the stamp design of a face value of HUF 115 First Lady and Heroes' Square, while on the HUF 145 denomination Mr Villám and a part of the Fishermen's Bastion can be seen. On the edge of the sheets containing 50 stamp designs, at the top and at the bottom, the logo of the 34th Racing Pigeon Olympiad is repeated.
The miniature artworks were designed by Kálmán Székely and printed by ANY Biztonsági Nyomda Nyrt. The stamps are to be released on 16 January at Filaposta and at large post offices in Hungary, but will also be available for purchase on Magyar Posta’s website. 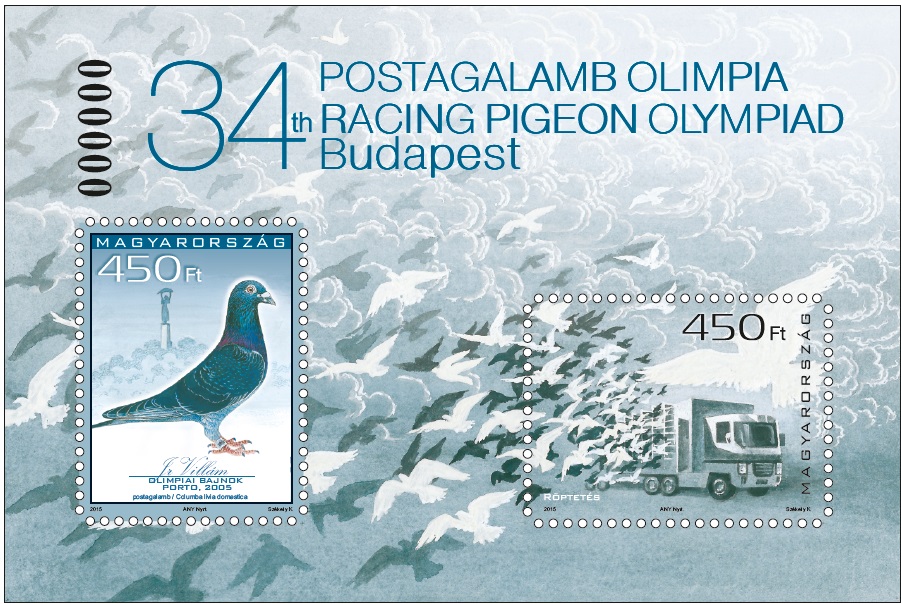 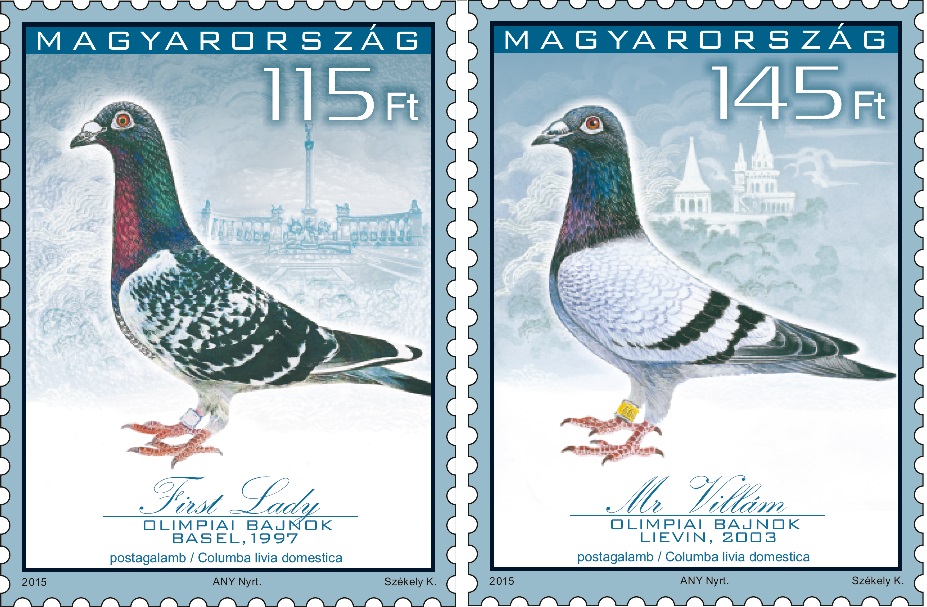 The Hungarian Racing Pigeon Sports Federation of a history of more than 130 years is organising the 34th Racing Pigeon Olympiad. The last time this prestigious event was held in Hungary was in 1975, so after 40 years we are expecting the world's pigeon breeders to Hungary again. The Racing Pigeon Olympiad is also an exhibition and fair, in the scope of which professional programmes and conferences are organised, and it offers points of interest to the general public too. Delegates from 50 countries are expected to the Olympiad. Racing pigeon breeding is a worldwide sport and hobby. In Belgium, the Netherlands and Germany more than 30 000, in Poland 50 000, while in China 1 000 000 million breeders perform their activity on a competitive basis. The sports federation in Hungary has more than 5 000 registered members. The international organisation of pigeon fanciers, the FCI (Fédération Colombophile Internationale) units 58 member countries.Racing pigeons are domesticated rock pigeons bred for finding their way home from large distances. Pigeons were used as messengers as early as around 500 BC, but the breeding of racing pigeons as a hobby started in Belgium in 1815-25, and then it spread throughout the whole of Europe. Racing pigeons were used in World War I and II.Racing pigeons can fly fast and persistently. The flying season lasts from the middle of April until the end of September, and during this period racing pigeon breeders take their pigeons for special organised flights. The pigeons need to be trained in advance, which is done by racing pigeon breeding associations and their organisations in the scope of special "training tosses". (Source: postagalamb.hu, wikipedia.org)