Magyar Posta, in cooperation with the World Wildlife Fund Hungary, is issuing a special stamp series to draw attention to the situation of endangered and protected animals and to the importance of their conservation.The stamps, which also bear the WWF’s logo were designed by the graphic artist Imre Benedek and produced by ANY Security Printing Company. The new issues will go on sale from 2 July 2018 and from that date will be available at first day post offices and Filaposta in Hungary but may also be ordered from Magyar Posta’s online store. 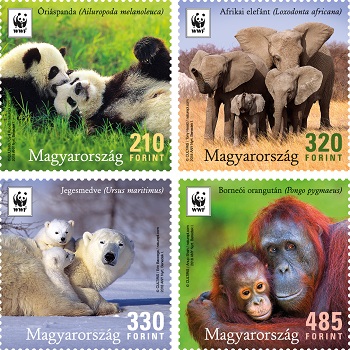 Biological diversity is diminishing significantly in almost every part of the world due to the effect of human activity, but this process can still be halted. The WWF, which operates in over 100 countries, has been pursuing this goal since 1961. Its mission is to create a future where humanity and nature live in harmony with one another by conserving biological diversity, reducing environmental pollution, promoting the sustainable use of natural resources in the long term and encouraging the use of renewable energy sources. Magyar Posta is supporting this goal by presenting four species whose habitats and populations are under constant threat.

The giant panda (Ailuropoda melanoleuca) appears on the first stamp of the series. This was one of the first animal species to reach the verge of extinction due to human activity destroying nature. Its range is now restricted to small areas in central and southern China. Thanks to the efforts of several organisations, including the WWF, the numbers of giant pandas are rising and its conservation status has improved to vulnerable.

The African elephant (Loxodonta africana), one of the planet’s best known animals and the biggest land mammal, is shown on the second stamp. Ivory poaching has regrettably reduced the numbers of this social and highly intelligent species drastically so that the African elephant is now classified as vulnerable.

The third stamp in the series features the polar bear (Ursus maritimus), which is aliving example of the tragic consequences of global warming. This species is superbly adapted to extremely cold weather conditions, but its habitat is threatened by the fast pace of climate change as the ice of the North Pole melts relentlessly. For this reason, this animal, too, is classified as a vulnerable species.

The Bornean orangutan (Pongo pygmaeus) is a species of the only great ape genus native to Asia. The shape of its head and the dentition of this species resembles most closely that of the human head and arrangement of teeth. This species of orangutan appears on the fourth stamp in the series. It has become critically endangered due to legal and illegal logging serving the expansion of oil palm plantations, forest fires, the prohibited but still continuing trade in animals and hunting.

The first day cover bears the footprints of these four species and the special postmark is the logo of the WWF, the giant panda. Protecting nature and the sustainable development of the Earth is the common concern of all of humanity, which this stamp issue symbolises.