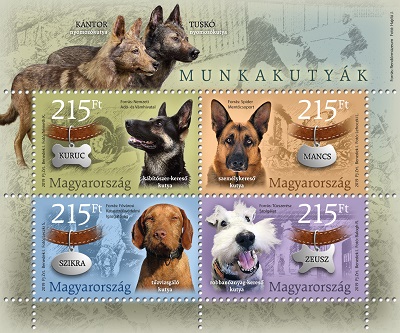 Dogs have a sense of smell which is far superior to that of humans and this ability can save people’s lives. The stamps feature four well-known dogs close up and in the background they are shown while at work. Kuruc, a German shepherd, was a narcotic detection dog working for the Customs and Finance Guard. His name is associated with the discovery of several major drugs hauls.
Mancs, a mantrailing German shepherd, was a rescue dog and a member of the Miskolc-based Spider Rescue Team. He saved the lives of several hundred people during missions such as searches after earthquakes.
Szikra, a wire-haired Hungarian vizsla, was an arson detection dog, whose task was to search for substances suitable for causing arson and who provided invaluable help on countless occasions investigating burnt-out cars, apartments and houses.
Zeusz, a wire-haired fox terrier, was an explosive detection dog, whose task was to search parcels, cargo, aircraft, vessels and road vehicles as well as crime scenes. International action to counter terrorism justifies the use of explosive detection dogs around the world. In the frame of the sheet Kántor, the famous detective dog that was the star of the television series about him, and Tuskó, a real-life detective dog, are featured.