The Sevso treasure is one of the most important finds of late Roman silver. Magyar Posta issued a stamp of the first seven pieces of the treasure in 2014. Another seven objects repatriated in the second phase are shown on the souvenir sheet issued in 2019. The sheet was designed by the graphic artist Imre Benedek and 44,000 perforated and 6,000 imperforated copies were produced of it by the banknote printing company Pénzjegynyomda. The new issue is available from Filaposta, philately specialist services, certain post offices and www.posta.hu - n. 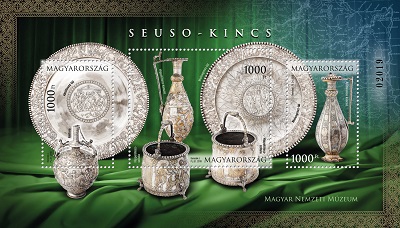 The pieces of the Sevso treasure are characteristic accessories of a dining set for feasts. Most of the artefacts are decorated with reliefs depicting mythological figures and stories. The seven objects shown on the souvenir sheet are the Achilles Plate, the Meleager Plate, an amphora, an animal ewer, and the Hippolytus set, consisting of an ewer and a pair of situlae, or buckets for carrying water. The silver artefacts on the souvenir sheet are enhanced by the use of diffraction film and embossed printing. The most famous silver gilt piece lending its name to the whole hoard of the Sevso Treasure, the Hunting Plate, has a Latin inscription in verse surrounding the scenes in its central roundel. This applies to all the artefacts in the set and can be seen under ultraviolet light. It reads: “HEC SEVSO TIBI DVRENT PER SAECVLA MVLTA / POSTERIS VT PROSINT VASCVLA DIGNA TVIS”. The stamp set includes a red-numbered, imperforated edition alongside the standard black-numbered souvenir sheet.