Magyar Posta continues the issue of its series of definitive stamps on postal history, which began in 2017. In 2018 six denominations are appearing. The series containing self-adhesive stamps with face values of HUF 20, 40, 50, 60, 90 and 500 designed by the graphic artist Barnabás Baticz is produced by Pátria Nyomda in quantities dependent on demand. The new issue will be available at first day post offices and Filaposta in Hungary from 2 May 2018, but may also be ordered in Magyar Posta's online store. 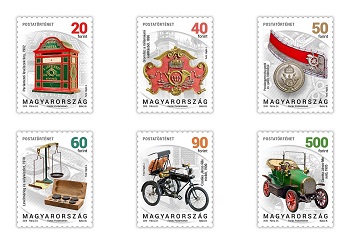 On the stamps of the definitive series on postal history, characteristic or unusual objects and work tools related to postal services are shown from the early days to modern times. In order to make their use simpler and faster, the stamps are self-adhesive.

The HUF 20 stamp shows a non-standard postbox, which was made to an individual design for the post office that opened in the building of the House of Parliament in 1902. The details of the technology used are identical with those used for standard postboxes with an emptying mechanism but the reason for the distinguishing dark green colour and the decoration reminiscent of the building is the particular importance of its environment. The background printing shows an enlarged part of the postbox.

The display boards of the Hungarian Royal Post made for the 1896 millennium exhibition hall were unified by the carved and painted decorative crest, which is the main motif of the HUF 40 stamp. An example is kept in the Post Museum. The motif of the post horn decorated by the symbol of the Holy Crown is supplemented by a bundle of cables in reference to electronic communication, the telegraph and the telephone. The background printing contains a section of an archive photograph made of the millennium exhibition hall by György Klösz.

The service uniform of postal and telegraph clerks ordered in 1896 was made of dark blue cloth. The collar of the jacket was covered in an 8 cm long scarlet velvet facing with a silver or golden strip dependent on rank and pay with silver or golden roses and the symbol of the post and the telegraph, the post horn, adorned with flashes of lightning. The HUF 50 stamp depicts the collar and a button from the uniform. The entire collar of the ornate jacket and an enlarged view of the braiding from the cuffs appear in the background printing.

On the HUF 60 stamp a pair of two-armed letter scales used by the Hungarian Royal Post for treasury post offices can be seen. The 50 cm tall scales with copper pans could weigh letter mail up to a weight limit of 2 kg in grams using copper weights. A detail from the set of weights illustrates the background.

The Hungarian postal administration was the first in the world to experiment with the use of motor vehicles in providing postal services. On 19 November 1900, 21 three-wheeled motorised vehicles were introduced to aid letter collection. The HUF 90 stamp shows a 1:10 scale model of a motorised tricycle for the collection of letters equipped with a carburettor and designed by János Csonka. The background printing shows a detail of the engine block of the tricycle.

Building on the success of the motorised tricycles for the collection of letters after the successful trial run of the prototype made by János Csonka, the Hungarian Royal Post put another eight motorised postal vehicles into operation on 15 January 1906 to aid letter transport and forwarding between large post offices and railway stations in the capital. The aforementioned postal car features on the HUF 500 stamp with a detail of an archive photograph depicting it in the background.