Magyar Posta continues issuing its series of definitive stamps on postal history, which began in 2017. In 2019 six denominations are appearing. The series of self-adhesive stamps with a total face value of HUF 2,850 was designed by the graphic artist Barnabás Baticz and is produced by Pátria Nyomda in quantities dependent on demand. The new issue is available from Filaposta, philately specialist services, certain post offices and www.posta.hu. 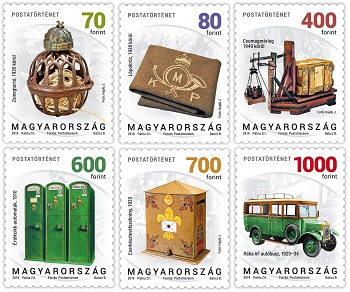 The stamps of the definitive series entitled Postal History issued annually depict characteristic or unusual objects and work tools used by the postal service which typify a certain period.
The stamps are self-adhesive in order to make their use simpler and faster. Of the prized artefacts of the Post Museum, devices from the interwar period and the Second World War are shown.