Magyar Posta is issuing a special souvenir sheet about true lavender, which was chosen as the medicinal plant of the year in 2018 by the Medicinal Plant Section of the Hungarian Society for Pharmaceutical Sciences. Seventy thousand copies of the numbered sheet designed by the graphic artist Krisztina Maros were produced by ANY Security Printing Company. The new issue will go on sale from 2 May 2018 and from that date will be available at first day post offices and Filaposta in Hungary but may also be ordered from Magyar Posta's online store. 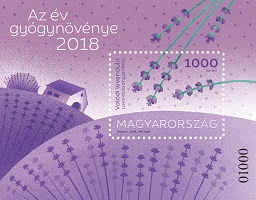 The history of medicine and medicinal plants has been closely intertwined for centuries. Although the use of plant extracts has less importance in modern medicine than it used to, a significant amount of the most modern active pharmaceutical ingredients still originates from plants, and there are several hundred medicinal compounds developed from the molecules of plants. Today a large number of medicines, medicinal products and several thousand dietary supplements that contain plant extracts are available.

True lavender, also commonly known as English or narrow-leaved lavender (Lavandula angustifolia) is a perennial, evergreen, hemispherical subshrub of Mediterranean origin belonging to the mint family and growing 40 to 60 cm tall. Its purplish blue flowers open at the end of June. Its dried flower and the essential oil made from it are listed in the Hungarian Pharmacopoeia. Species of lavender have been used for medicinal purposes for disinfecting wounds and treating insomnia since ancient times. True lavender spread in Europe thanks to Benedictine monks and has been planted as an ornamental plant and herb also in Hungary since the 15th century. Lavender was first cultivated in Hungary for industrial purposes in 1920 when Gyula Bittera planted stocks imported from France on the Tihany Peninsula. Today it is one of Hungary’s most popular medicinal plants and is grown ever more widely. In phytotherapy lavender is mainly used as an infusion to treat anxiety and insomnia and to ameliorate digestive complaints. The essential oil made from the plant is used as a substance in aroma therapy and is an important ingredient in the cosmetics industry.

In 2013, the Medicinal Plant Section of the Hungarian Society for Pharmaceutical Sciences launched the Medicinal Plant of the Year initiative, whose main aim is to promote the use of plants in medicine and to inform the public about the proper use of medicinal plants. The medicinal plant of the year may be any plant that is in the focal point of interest due to new scientific evidence associated with it and is used as part of modern therapy.

The design of the souvenir sheet is dominated by the colour purple in reference to the flower of true lavender, which evokes the atmosphere of the Sun and broad lavender fields. The simplified depiction reminiscent of folk motifs highlights the elegant appearance of the plant. The motifs of the stamp design also appear on the first day cover and commemorative postmark.