In memory of the battleship Saint Stephen

Magyar Posta is issuing a commemorative souvenir sheet in remembrance of the battleship SMS Saint Stephen (Szent István in Hungarian). Seventy thousand perforated and two thousand imperforated copies of the numbered souvenir sheet designed by the graphic artist Imre Benedek were produced by ANY Security Printing Company. The new issue will be available at first day post offices and Filaposta in Hungary from 29 June 2018, but may also be ordered from Magyar Posta’s online store . 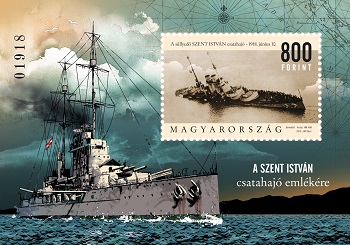 A hundred years ago the last months of the First World War were drawing to a close and both sides were fighting more and more determinedly and desperately for victory. The Entente sealed off the Adriatic Sea at the Strait of Otranto preventing the ships of the Central Powers from moving southward towards the Mediterranean Sea. This blockade had already been broken in 1917 but the Entente managed to re-impose it.

The goal of the new operation launched in 1918, in which the entire fleet of the Austro-Hungarian Monarchy took part, was to break the blockade of the Strait of Otranto and to trap the Entente’s naval forces in the Adriatic. The operation was launched on the moonless night of 9 June when the forces of the Monarchy divided into two groups moving out to sea. The SAINT STEPHEN was part of the second group.

The construction of the only battleship in Hungarian history started in January 1912 in the Ganz Danubius ship factory in Fiume (today Rijeka). It took two and a half years for the vessel to be completed. The fact that a new slipway had to be built prior to starting the works is an indication of its size as the existing one was not suitable for such a large ship, which was about 150 metres long and had a displacement of 20,000 tons.

SMS SAINT STEPHEN was among the first battleships equipped with three 305 mm guns in each turret. The main weapons of the ship consisted of these guns, altogether twelve in the four turrets, but the gun turrets placed one over another caused problems of stability. Later, triple gun turrets became the model for the battleships of the American Navy as well. The Saint Stephen had two propellers and a maximum speed of 20.4 knots (38 km per hour).

Although the ship entered service in November 1915, she spent most of the war at anchor in the port in Pola (today Pula) performing mainly anti-aircraft duties. She had to wait for her first mission until the aforementioned night of 9 June. Due to technical problems, however, the convoy could only leave the military base at Pola with an hour’s delay, which meant that the ships had to proceed after dark as well. In the dawn light two Italian anti-submarine motor boats spotted the Austro-Hungarian ships and managed to approach them. The battleship SAINT STEPHEN was hit by two torpedoes at 3.31 am on 10 June. After the detonations, a several hour-long struggle to save the ship began, which unfortunately was not successful. In the end the ship capsized and sank within minutes. Its crew consisted of 1,087 persons, of which 85 sailors and 4 officers lost their lives.

The failure destroyed the last and largest planned Austro-Hungarian naval marine operation. After the tragedy of the battleship SAINT STEPHEN, the monarchy’s fleet did not put to sea again.