Magyar Posta is commemorating Hungarian Television’s colour experimental transmission, which began 50 years ago, by issuing a special stamp. One hundred and fifty thousand copies of the stamp designed by the graphic artist András Szunyoghy Jr were produced by ANY Security Printing Company. The new issue is available from Filaposta, philately specialist services, certain post offices and www.posta.hu. 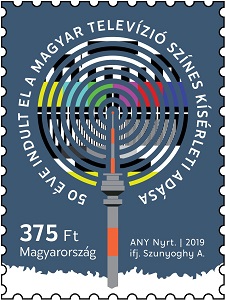 The first television broadcast was made in Hungary in the 1950s and, as in most countries, watching television became the most popular leisure activity within a few decades.

A good few years had to pass before colour broadcasts replaced black and white: the first colour television transmitter was inaugurated in 1969 and experimental broadcasting began immediately.
At the time, colour television sets were regarded status symbols due to their high price. From 1970, after local mass production started, they became accessible to a growing number of people. The stamp design depicts a stylised TV transmitter with a colour monoscope in the symbolic rays of broadcasting. The first day cover features the title of the stamp with a scale of colours underneath. The special postmark is an archetypal contemporary television set with an aerial.