Magyar Posta is continuing the presentation of Hungarian saints and blesseds in 2018. The Hungarian Saints and Blesseds VI numbered souvenir sheet honours Saint Andrew Zorard, Saint Benedict and the Blessed Maurus of Pécs. The souvenir sheets designed by the graphic artist Imre Benedek were produced by the banknote printing company Pénzjegynyomda, and will be available at first day post offices and Filaposta in Hungary from 1 August 2018 and can also be ordered from Magyar Posta’s online store. 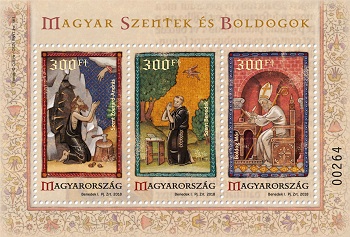 The first saints of the medieval Kingdom of Hungary were the hermits of Mount Zobor. Tradition has it that they were canonised in July 1083 prior to Gerard and his fellow martyrs as well as King Stephen and his son Prince Emeric being declared saints. Their legend was recorded by Saint Maurus, the bishop of Pécs.

Saint Andrew Zorard • He probably arrived in the Kingdom of Hungary from Polish territory during the reign of King Stephen as a hermit called Zorard. He took the name Andrew in the Benedictine Monastery on Mount Zobor near Nitra, today in Slovakia. With the permission of his superior Philip, he left the monastery and became a hermit. He practised an ascetic life and also worked hard as a tree feller. He fasted austerely and only ate a walnut a day during Lent. Andrew often kept vigil and made special devices to prevent himself falling asleep involuntarily, such as sharpened canes. He probably died around 1009-10 and was then buried in Saint Emmeram’s Cathedral in Nitra and was venerated as a saint. He is the patron saint of Nitra.

Saint Benedict • A disciple of Andrew, he also lived as a hermit on Mount Zobor. After his spiritual teacher’s death, with his abbot’s permission he went and lived in Andrew’s cave, continuing his lifestyle. He was murdered by a gang of thieves looking for treasure three years later. His body was thrown into the river Vah but, according to legend, it was guarded by an eagle, allowing his body to be found. He was buried next to Andrew in Nitra. The place of their burial became a cathedral in the early 12th century. Today the tomb of the two hermits is in Nitra Cathedral in the chapel behind the altar of the Deposition. The chapel and the ruins of the monastery on Mount Zobor are visited by Slovakian and Hungarian Catholics from the city and locality in pilgrimage. In this way these saints and their lives are a bridge linking the Churches of three Central European nations. Saint Andrew Zorard and Saint Benedict are the patron saints of the Roman Catholic Diocese of Nitra.

Blessed Maurus of Pécs • He was born around 1000 in Hungary. He became a monk in Pannonhalma and in 1036 was appointed bishop of Pécs, where the construction of the cathedral was completed during his incumbency. He was one of the three bishops who crowned Andrew I in Székesfehérvár. His initials appear on Tihany Abbey’s 1055 charter of foundation and he also consecrated Szekszárd Abbey. He wrote the biography of the two saints Andrew and Benedict in Latin as the first Hungarian author. He passed away around 1070. His veneration was approved by Pope Pius IX in 1848, and in 1925 he became one of the patron saints of the Diocese of Pécs.