The Hungarian House of Parliament is one of the most beautiful public buildings in the world. Since 2012 its special architectural solutions have been considered and presented in a new philatelic series. The commemorative miniature sheet issued in 2016 as part of the series contains eight stamps showing the façade of the building by focusing on certain external details. The eclectic Gothic revival building was built between 1885 and 1904. The first parliamentary session held in the half-finished building took place on 8 June 1896. The 120th anniversary of this event is being commemorated by issuing the miniature sheet. The miniature sheet was designed by the graphic artist Eszter Domé using photographs by József Hajdú and produced by the printing company Pénzjegynyomda.The miniature sheet is on sale in first day post offices and at Filaposta in Hungary while stocks last, but may also be purchased from Magyar Posta’s online store. 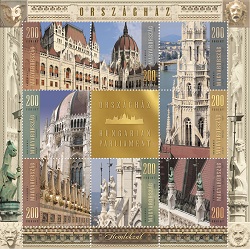 The arrangement of the building designed by Imre Steindl (1839-1902) is the result of a conscious choice of symbols. Viewed from the Danube, the halls of the upper and lower house are surmounted by turrets and spires on both sides of the dome, a reminder of the bicameral system operating at the time of construction. The dome rises between them, symbolising the unity of legislation, and joint sessions of the two chambers used to be held beneath it on special occasions.The wing lying parallel with the river is 268 metres long and 123 metres at its widest point. The dome including the tower is 96 metres high. Different architectural styles and motifs are incorporated into the building: its layout is Baroque, the ornamentation of the façade recalls the Gothic world, while the ceiling decoration evokes the Renaissance.The floor space of the building on four storeys approaches 18,000 square metres. Its volume is 473,000 cubic metres, which could accommodate 50 five-storey houses. Approximately 40 million bricks were used in its construction and 30,000 cubic metres of stone were carved to cover its surfaces. Numerous statues, gargoyles and mouldings decorate the façade. Ninety sculptures represent the great figures of Hungarian history.