Magyar Posta is continuing the stamp series History of Clothing, which began in 2016, by presenting two 17th-century wedding outfits that are kept in the Esterházy treasury. Sixty thousand copies of the miniature sheet designed by the graphic artist István Weisenburger were produced by the banknote printing company Pénzjegynyomda. The new issue will go on sale from 3 April 2018 and from that date will be available at first day post offices and Filaposta in Hungary but may also be ordered from Magyar Posta’s online store. 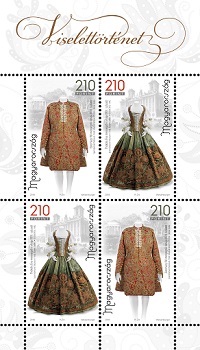 Every age has had eye-catching and popular fashions that are nevertheless short-lived. What they all have in common is the endless ingenuity that inspires people to define themselves through their clothes. On the second miniature sheet of the stamp series, selected historic garments of the Hungarian nobility, who set fashions for many long centuries, are shown.

The first stamp shows a dolman, the undercoat of Hungarian male clothing, which could be worn over a shirt without a pelisse. The sumptuous baroque suit was made of red Italian satin in Hungary around 1680 and is adorned with pairs of fasteners each formed of two half hearts held in white hands with gold-winged white doves perched on the hearts and hands. It was once thought that the dolman was Palatine Miklós Esterházy’s nuptial suit but more recent research suggests that Palatine Pál Esterházy wore the outfit at his second wedding, when he married Éva Thököly in 1682.

The second stamp shows a woman’s wedding outfit comprised of a skirt and bodice, which according to the 19th-century tradition were part of the wardrobe of Pál Esterházy’s first wife Orsolya Esterházy. Later evidence indicates that these items were associated with Éva Thököly, but it is also possible that they were the bridal wear of both women. The matching skirt and bodice were made and embroidered in Hungary. The once dark blue Italian velvet has discoloured and turned green, yet the set remains an exceptional example of old Hungarian attire. All the extant garments housed in the Esterházy treasury originate from the 16th and 17th centuries. This is the only known collection of related clothing of this nature in Central and Eastern Europe, comprising 21 garments, which has been in the safekeeping of the Museum of Applied Arts since 1919.

In the background of the stamps, a 19th-century depiction of the Esterházy Palace in Kismarton (today Eisenstadt, Austria) and the Leopoldina temple in the grounds of the palace can be seen.