HEROES OF WORLD WAR I

Magyar Posta is honouring the heroes of World War I by issuing a special souvenir sheet. Forty thousand copies of the numbered souvenir sheet designed by the graphic artist Glória Hefelle were produced by the banknote printing company Pénzjegynyomda. The new issue will go on sale from 25 October 2018 and from that date will be available at philately service points and Filaposta in Hungary but may also be ordered from Magyar Posta’s online store. 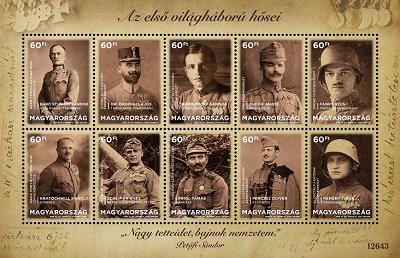 Because of the assassination of its heir apparent on 28 June 1914 in Sarajevo, the Austro-Hungarian Monarchy sent an ultimatum with a 48-hour deadline to Serbia on 23 July. After its rejection, Austria-Hungary declared war five days later on 28 July. At the very start of the war, it was uncertain whether the conflict would remain a local clash or escalate into a world war affecting all the great powers. The European powers already had mobilisation and war plans in place decades beforehand. The military leaders intended to carry out their strategies in the event of the outbreak of a war as quickly as possible in order to resolve the conflict speedily and to secure a swift victory.