In 2018 the theme of the miniature sheet with a surcharge issued to support youth stamp collecting is the universe with a selection of the varied configurations of the Milky Way Galaxy. Magyar Posta devotes the amount of the surcharge on the two denominations of the new issue, a total of HUF 150, to supporting youth stamp collecting. Thirty thousand copies of the miniature sheet designed by the graphic artist Nóra Horváth were produced by ANY Security Printing Company. The new issue will go on sale from 2 May 2018 and from that date will be available at first day post offices and Filaposta in Hungary but may also be ordered from Magyar Posta’s online store . 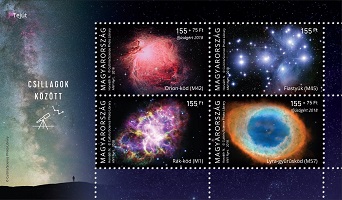 The Earth, Sun and Moon are three celestial bodies that everyone knows. In the large cities today the stars and planets are hard to see in the night sky. For a good view of our own galaxy in the heavens, i.e. the Milky Way, one has to leave the cities. The sight of a clear night sky full of stars inspires awe even today, just as it did for our ancestors whose imagination populated the sky with heroes and mythological beings. This spectacle becomes truly mind-boggling when viewed through a telescope as the most modern devices enable billions of stars to be seen. Four astounding phenomena from the Milky Way are recorded on the stamps of the miniature sheet, each allowing a glimpse into a stage in the life cycle of stars.

The first stamp shows the Orion Nebula, which is one of the most famous spectacles of the sky due to its stunning colours. The light of the cloud of gas consisting of ionised hydrogen 1,500 light years from the Earth comes from the tight cluster of stars in its heart called the Trapezium. The hot and young Trapezium stars blew a hole in the layer of dust, illuminating the surrounding matter. In some areas of the dust cloud new stars are being created still today.

The second stamp depicts the open star cluster the Pleiades, also known as the Seven Sisters, which is in the constellation of Taurus. The seven stars of the cluster, which is about 440 light years away, are visible to the naked eye and were personified in Greek mythology, mentioned in the Old Testament and feature in Hungarian legends. It is now known that the objects in fact consist of several hundred stars. Open clusters, such as the Pleiades, are groups comprised of young stars created in a huge cloud of gas and dust which are moving further and further apart from each other over millions of years.

The Crab Nebula, 6,500 light years from Earth, is featured on the third stamp. In 1054 Chinese and Arab astronomers observed a new bright star on the sky visible for 23 years. Somewhat less than a millennium later it was realised that the phenomenon was caused by an event marking the end of the life of a massive star, a supernova explosion, and the Crab Nebula is the remnant of this. The cloud of dust was given its name due to the fact that the drawings made of the object using simple instruments in the 19th century resembled a crab.

The fourth stamp features one of the best known planetary nebulae, the Ring Nebula in the constellation of Lyra 2,300 light years away. This spectacular object was formed from the dim shell of gas expelled by a white dwarf in the middle of the nebula. In billions of years’ time, at the end of its life, our Sun will become a red giant, casting off its external layers, and a white dwarf, similar in size to the Earth, will form in its place with a characteristic planetary nebula like that of the Ring Nebula around it. The nebula was first photographed in 1886 by Jenő Gothard, a Hungarian astronomer, who also discovered the star in the middle of the cloud of dust.

The Milky Way and a schematic diagram of the constellation Cassiopeia appear on the left of the miniature sheet. The first day cover and special postmark for the stamps point to the mysteries of space between humanity and the stars yet to be discovered.