Magyar Posta is issuing a promotional definitive domestic no value indication stamp with a label called European Year of Cultural Heritage 2018 featuring versions of the logo of the thematic year, which appears on the label sections of the Your Own Stamp sheet. The new issue was produced by the printing company Pénzjegynyomda, and will go on sale on 1 August and be available in first day post offices and at Filaposta in Hungary from the date of issue, but may also be ordered from Magyar Posta’s online store . 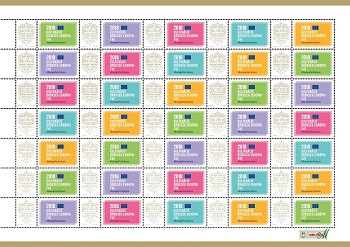 2018 is the European Year of Cultural Heritage, which was launched by the European Culture Forum in Milan on 7 December 2017. The European Union introduced thematic years in 1983 to draw attention to specific areas of our daily lives, to encourage dialogue and to create an opportunity to get to know the relevant values better.

The aim of the European Year of Cultural Heritage is to encourage more people to discover and find out more about Europe’s cultural heritage, and to reinforce the European identity and a sense of belonging to a common European family in citizens. European cultural heritage has many forms such as buildings, historic towns, monuments, books, archaeological finds, landscapes, flora and fauna, traditions, languages, craftsmanship, traditional knowledge and skills, and now even digital contents. 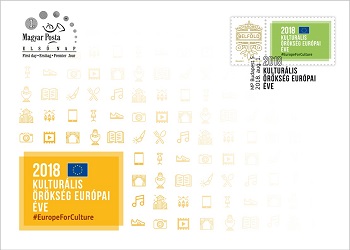 During the year there will be many thousand EU-level national, regional and local events throughout the European Union aiming, through appropriate education, to focus on children and young people who will preserve and pass on this cultural heritage to future generations.

This will be implemented through a series of European, national, regional and local initiatives. Each Member State appoints a national coordinator to decide on the programmes to be included in the national calendar of events at a national and regional level. The events which are accepted for this may freely use the thematic year’s official logo, slogan and brochures.